The UEFA Champions League, by the numbers

Every football player aims to win the Champions League at least once, dreaming to hold the “big-eared Cup” on the most prestigious stage. It is by far the most fascinating trophy of the football season, because it features European top clubs and their star players.
In addition to the football greatness we can see in the UCL, what makes it special is a distinctive and well-recognized brand, obtained through a well-rounded proposition (jersey’s patch, game ball, pre-game anthem, half-court tarp, etc.) that has been giving to UCL immense popularity.

What are UCL revenue streams? And how are revenues distributed?

That said, it’s easy to understand that UEFA, the European football governing body and UCL promoter, has been attracting huge investments from multiple stakeholders. Every three years, when they sit down to renew commercial deals, UEFA always manage to raise its revenues: in the graphic below, we can see how 2015-2018 period saw a +32% increase on the precedent cycle, thanks to the UCL revenues going up 34% and Europa League (the secondary European clubs’ competition) growing 23%. 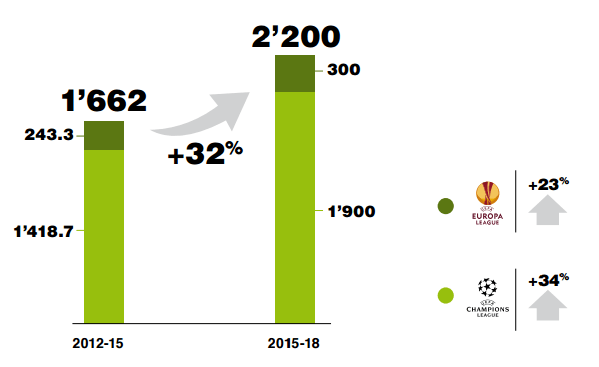 The biggest revenue streams, as you may guess, are broadcasting rights and sponsorships: if we combine those with ticketing and hospitality, we have the total business volume of UEFA top competitions: 2.2 billion euros (for each season).
The distribution form of the money given to the clubs is pretty much complicated: taking the last two UCL finalists (Real Madrid and Atletico Madrid) as examples, we put our lens on the money each team receive from UEFA. 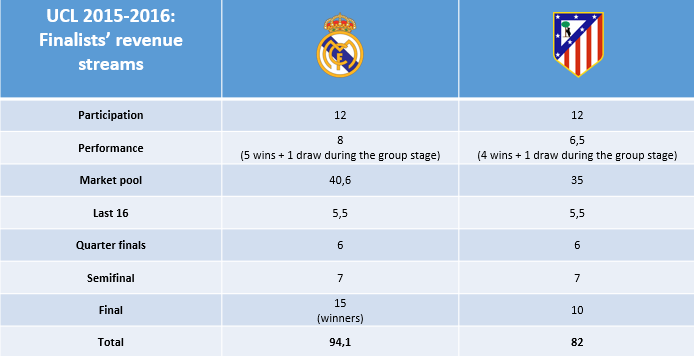 As you can see, the so-called “prize money” is divided into many different bonuses. The participation (12 millions) and the path from Last 16 to semifinals, gives equal bonuses to every team, while in the final, the winner is awarded with 15 million and the runner-up gets “only” 10. Winning games in the group stage helps teams not only to get to the last 16, but also to earn more money: in fact, every win of the first phase is rewarded with 1,5 million, while a draw with 500.000 €.
The more variable – and debated – bonus is market pool, a prize which depends on the value of domestic leagues TV rights, and it is distributed to each country’s teams based on the number of clubs competing and the amount of games played by each.
In order to understand this prize, here’s an example of how it works: during 2014-2015 season, Spain had four teams competing in the group stage (Real Madrid, Barcelona, Real Sociedad and Atletico Madrid), and their market pool was given 24.6 million to Barca (UCL winner), 20 to Real Madrid (out in the semifinals), 17 to Atletico (out in the quarter finals) and 8.5 to Real Sociedad (out in the group stage). During the same year, Juventus, UCL runner-up, earned a huge amount of market pool money (58.2 million) as the only other Italian team in the competition was AS Roma, which went out in the group stage but managed to receive 35.3 million in market pool bonus.
There were many protests about this distribution pattern, especially from ECA (European Club Association), so they came to terms on a new agreement, which will introduce a new parameter based on clubs’ historic results, so that top teams can get a fixed bonus because of their continued success.

In addition to adidas, which is the referees’ clothes brand and the provider of the game ball, Champions League is sponsored by high profile international companies: Gazprom, Heineken, Mastercard, Nissan, Pepsi Co. (which promotes Pepsi, Gatorade and Lay’s), Sony (Playstation and Xperia) and Unicredit that pay a lot of money (sources say that every global sponsor gives UEFA £ 45 million per season) to see their brand associated with the Champions League.
Mastercard, which has been a UCL partner since 1994, during the last season promoted campaigns focused on storytelling, trying to find new ways to engage customers. In a funny commercial, the world-class goalkeeper Gianluigi Buffon meets arguably his craziest fan, who has just got a very special tattoo…

A very interesting case study is the Unicredit’s one, UCL sponsor since 2009. Federico Ghizzoni, CEO of the bank, shared insights about the many benefits Unicredit got from its partnership: he stated that the company increased its revenues by € 70-90 million with sponsorship-related products, and got an overall return on investments estimated around 255%. It shouldn’t come as a surprise that UBI Banca, Unicredit fierce competitor, made a strong push into sport sponsorships, reaching agreements with two great properties like NBA and Juventus.
When the stage was set in Milan for the Final, Unicredit collaborated with the USA agency FanCam in order to give to fans of the stadium the opportunity to tag themselves on a special 360 photo, so that they could show their support and share their position on social media.
Last but not least, we show you a Heineken commercial, a company always keen on creating positive feelings towards its brand with funny and engaging ads. This time, they produced a video which tells the story of five men who try to escape a party to go to San Siro and attend the UCL Final: helped by football legend Roberto Carlos, they manage to arrive in time to watch the game and, of course, to drink a cold beer.

In the latest months, discussions about a possible European Super League have become more intense, as ECA’s ambassadors Karl-Heinz Rummenigge (CEO of Bayern Munchen) and Andrea Agnelli (President of Juventus) would have explored all options in case UEFA hadn’t given to top clubs what they demand: more money and more power.
When August the 26th came and a UCL’s format change was announced, it was clear that ECA came up as the winner, and would have started seeing the benefits of the reform from 2018.
So what about these changes?

The more talked-about news is about the top four leagues (those played in England, Spain, Germany and Italy) that will have four guaranteed spots each in the UCL group stage, and these spots will be given to the top ranked teams at the end of each season. That’s a profound change that will make the group phase more exciting and interesting, as the current format often gives fans a predictable outcome at the start of the tournament. 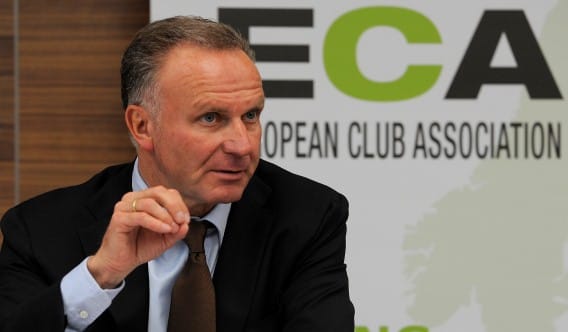 Another important change is that Europa League’s winner will enter UCL without having to face preliminary phases; in addition to that, a new UEFA-ECA agency was instituted with the aim to prevent from another Super League’s threat.
However, the reform was harshly criticized by EPFL (European Professional Football Leagues) in an official note published on their website. They say UEFA’s conduct is “unacceptable”, and they accuse UEFA to be guilty of changing competitions “without support and consensus of the national leagues organizers”. Moreover, they stated that the new format will “exponentially increase sporting and financial gap between big and smaller European clubs”.
On one hand, we have ECA, which is composed by 220 clubs from 53 different countries, satisfied for the protection given by UEFA; on the other, we have EPFL, composed by every European football league (but without support of top clubs), that sees the position of smaller teams compromised and a potentially growing gap in the national leagues.
One thing is certain: the new UCL format will make the competition even more attractive for sponsors and broadcasters, as well as it will pave the way for new fans and new markets to care about the tournament.
Potential downfalls of these changes are there to be seen: it’s up to you to decide if they’re worth it.