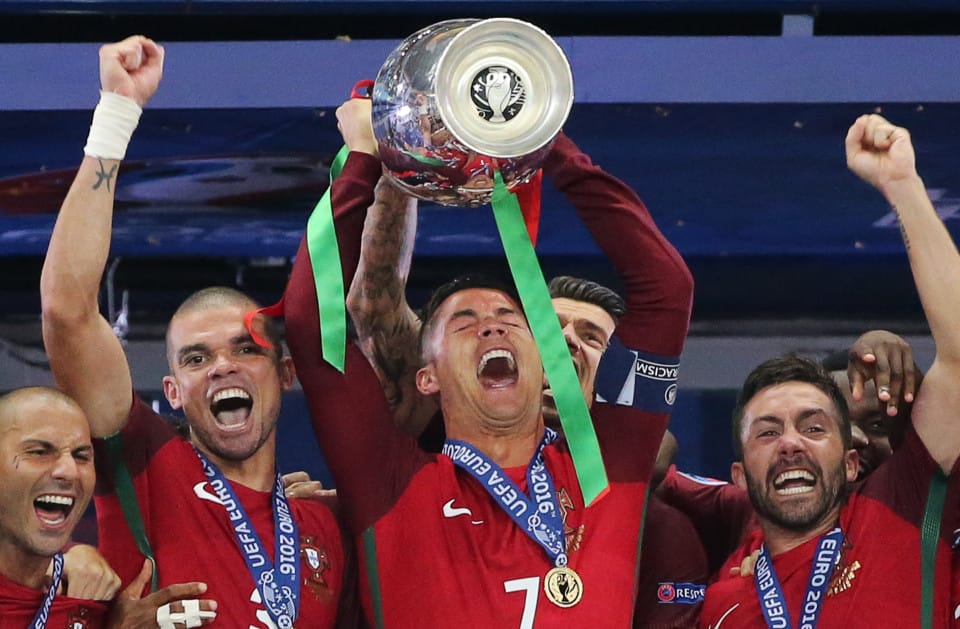 The sports summer started off with Euro 2016, held in France from June the 10th to July the 10th; after a couple of months, international football has come back with many changes, as teams looked to upgrade their roster with new young players and/or a new coach. Nonetheless, what we want to do here is to take a little step back to Euro 2016, by analyzing who was better at growing his social media fan-base during the competition. As we do that, we will focus not only on the players, but also on sponsors and on national teams.

Players: to be great on the pitch helps you, but you need to build your own character too

Like every other big sports event, Euro 2016 let the players being the center of attention. It didn’t fall short of impressive stories, like Ibrahimovic retiring from international football and Cristiano Ronaldo being injured during the final, or Bale carrying the Welsh team and Will Grigg becoming the competition’s unexpected hero. To evaluate who took more advantage from the media exposure is not easy, nor it is to assess who gained the greatest commercial push: the Brandix Sports Index, an index invented by London-based agency Brandtix, helps us to discover real winners and losers, by matching advanced performance data of every player with his social stats and sentiment. 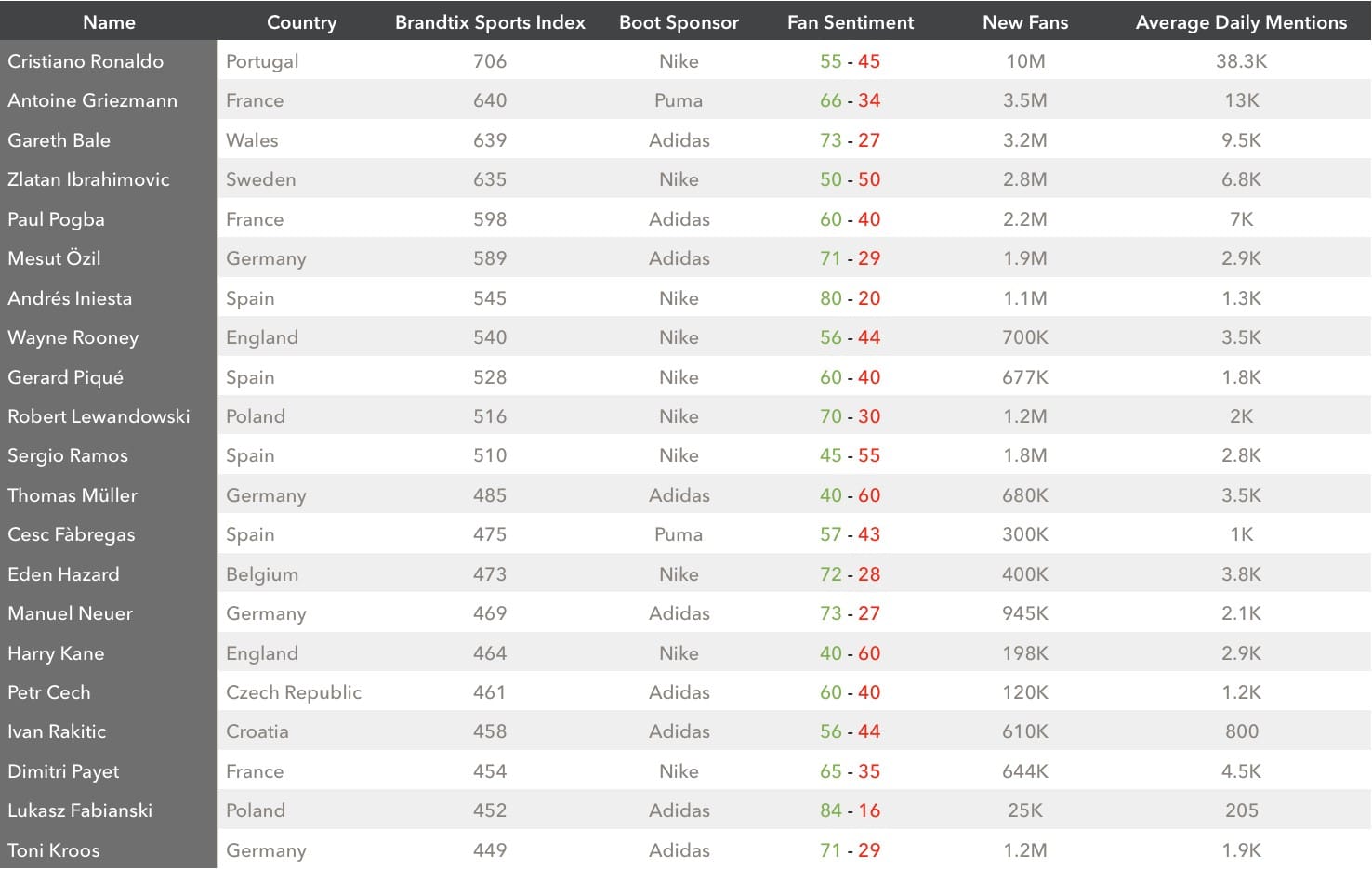 That’s the Brandtix Euro 2016 top-20: a lot of finalists in the first places, and an evident dominance of Nike and Adidas athletes

We are, somehow, obliged to begin with Cristiano Ronaldo, who has, by far, the greatest social media fan-base, and whose endorsements cost a lot of money (it is estimated that one of his tweets costs around 260,000 $). He had an up-and-down tournament, but he managed to gain 10 million of new fans and had a few moments of incredible social media buzz, especially when he got injured in the final and when he celebrated the victory with his team.

Proud of my team. Proud of my country. Make them believe. #JustDoIt pic.twitter.com/Zt2iqmDPZQ

Antoine Griezmann is probably the one who made the most out of Euro 2016, as he established himself as one of the greatest European players. He (and his technical sponsor Puma) benefited a lot from his performances as he was the most beloved French player with 3.5 million social users becoming his fans: of course the 6 goals he scored during the tourney had a lot to do with that, but it was also due to the popularity of his character outside the pitch, very fitting with pop culture and its symbols.

If you want to dig into the relationship between pop culture and sports, we can’t stay away from talking about Paul Pogba (+2.2 million fans during Euro 2016). He is undoubtedly the greatest expression of a football player who built himself a very appealing personality to a young audience, which is invested not only in the sports sector, but also in other social trends, like fashion and music. In a few months, Pogba attracted people’s attention not only on the football pitch (but his Euro 2016 appearances weren’t as good as expected), but also on his summer vacations in Florida, on his transfer value and on his new Adidas deal. (Moreover: don’t you think that Adidas is going to leverage his pop potential just a little bit?)

Even if he doesn’t appear on Brandtix’ ranking, the real hero of Euro 2016 was Will Grigg, striker of the Northern Ireland team, who didn’t play a single minute in the tournament. Nonetheless, he became a cult on the web thanks to his fans, who created a chant that went viral, taking inspiration from the song “Freed from Desire”: so the real hit of the summer was born, and it sounded like this: “Your defence is terrified, Will Grigg is on fire!”. The highest point in this story was reached when a journalist asked German defender Mats Hummels if he was terrified to face Will Grigg… and he found out that Mats’ real concern was to obtain Grigg’s jersey at the end of the game!

Nowadays, there’s much debating about how much of a team’s marketing success has to do with the results it gets on the pitch. Reality says that, although winning is the key to attract social media audience, to realize cool infographics, creative contests and engaging posts, it is the safer way to obtain social success. The Italian national team is a good example of how to do that: with fresh concepts and attractive graphic designs, the social accounts managed by Marco di Noia secured the biggest digital growth of the group stage, adding more than 440,000 fans (Result Sports data). Between the many interesting activations, I suggest you to look at these two. The creation of animated GIF to celebrate every scored goal, starring the scorer. To testify how successful this idea was, many football clubs are now doing the same with their accounts;

#9Luglio2016.  To remind all Italian fans about the tenth anniversary of the 2006 World Cup won in Berlin, FIGC brought its social accounts back to 2006 (with the old logo, too), ready to recall those amazing moments with comments and opinions by the ones who played in Berlin.As expected, the French team had the greatest digital growth by the end of the tournament (+1,349,633 fans), overcoming Portugal (+953,415) and Italy (+925,973), even if they were beaten by Portugal in the final. The French social media team had to convey the love and enthusiasm of the hosting country towards the squad, so they created many fans-centered contents, especially with suggestive surrounding like the Tour Eiffel fan zone. In addition to that, having a roster full of social media stars, like Pogba and Griezmann, the French social accounts reached high engagement rates by portraying them with captivating graphics. 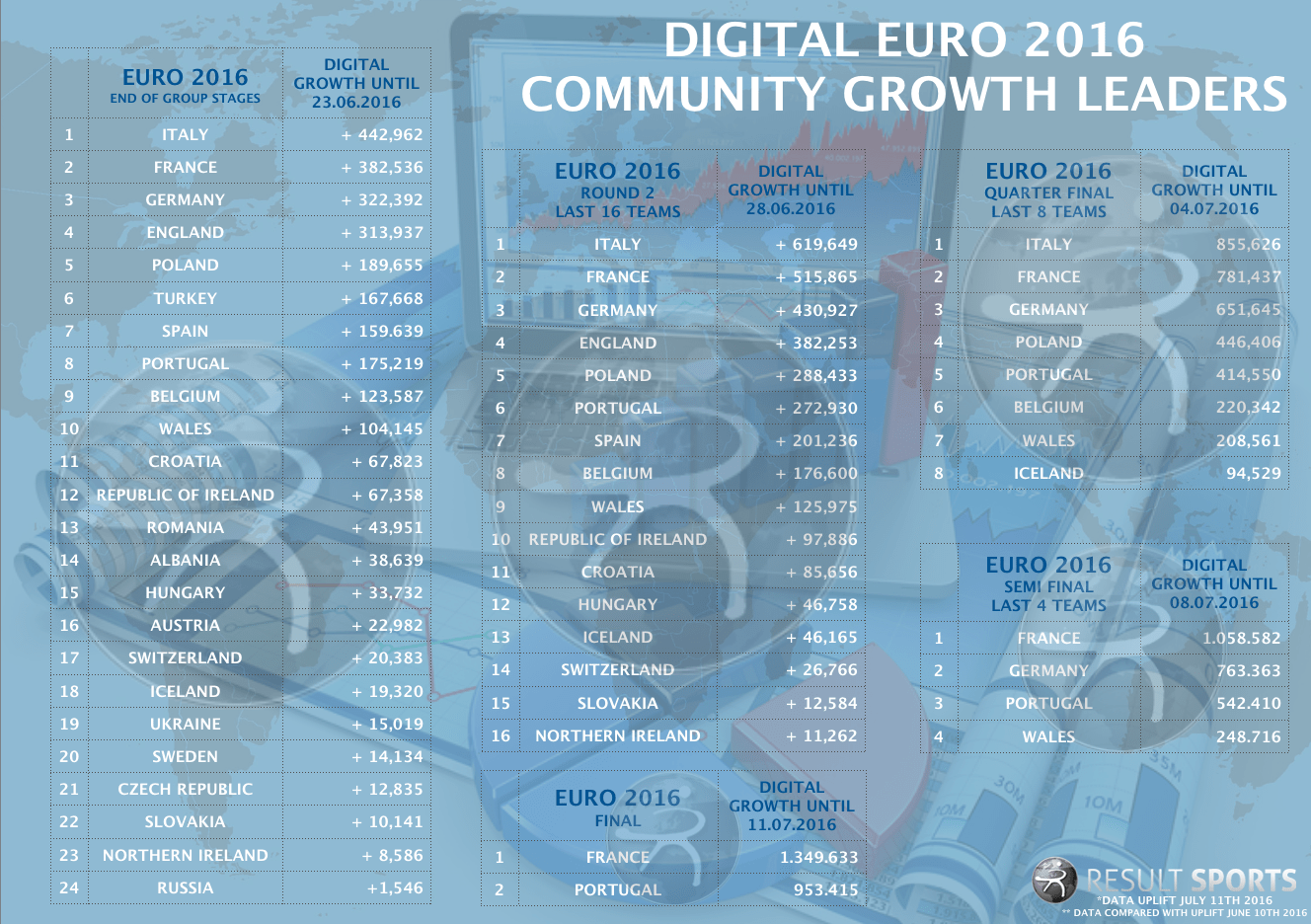 Here are the complete data about digital growth during Euro 2016, shared by Result Sports

Between the many global sponsors of Euro 2016 (Adidas, Carlsberg, Coca-Cola, Continental, Hisense, Hyundai-Kia, McDonald’s, Orange, SOCAR, Turkish Airlines), those that came up with the more successful ideas were Orange and Hyundai, according to the analysis provided by Seattle PR agency Waggener Edstrom. The common intent of these two companies was to be facilitators of a better fan experience during the event. Orange managed to do that by realizing an amazing activation, allowing the more active social media fan-base to light up the Tour Eiffel with its country’s flag colours; meanwhile, Hyundai focused on creating welcoming fan zones, where many supporters joined up to watch games and to experience intense emotions in a branded environment, so that positive sentiments towards Hyundai was guaranteed.

Tonight, I am English! Congratulations to the supporters of #ENG who tweeted to light me up with @orange! #Euro2016 pic.twitter.com/4PbXurxpBe

Another significant case history was the Carlsberg one: in fact, facing the restrictions of “Loi Evin”, the French law, that forbids alcohol brands’ advertising during sport events, had to find a very creative approach to promote their sponsorship. They showed their marketing brilliance by deciding to use their historic brand font, colour, and design using the word “Probably” written down instead of “Carlsberg”: it allowed them to obtain the same awareness (50% of prompted recall of the brand) reached by big sponsors like McDonald’s and Coca-Cola that could show their full brand names. On social media, the Danish beer company made a smart move by using its rights to stream highlights of the games, producing contests like “Goal of the Round” or “Man of the Match”, which got high social impressions.

What was the best Goal of the Tournament? Go to https://t.co/w6cGyjr9Zr and vote now. #Probably #EURO2016 pic.twitter.com/Xb8O5wsTvV

You won’t be surprised to hear that ambush marketing had a prominent role in Euro 2016 advertising. Many non-sponsor companies tried to find a sneaky way to promote their brand, but nobody was as successful as Iceland Foods: the UK frozen food specialist, that profited from the unexpected Icelandic results on the pitch, gaining an impressive brand awareness even though they didn’t have any sponsorship deal in place. When Iceland faced England for the last-16 game, Iceland Foods changed its Leicester store’s sign, going from “Iceland” to “England or Iceland”, showing its will to support both teams. After the shocking Icelandic win, the UK chain made it clear they were not the enemy by offering free beer to the disappointed English fans.

Everyone should be passing on their congratulations to @footballiceland they are the football team. We are the UK frozen food specialists