Google is well-known for being an excellent promotion channel for a company or brand: you only need to make a search on the web to notice the sponsored ads of many companies that appear together with organic results. However, today we are not going to speak about the companies that use Google Adwords to promote themselves on the search engine, but about those brands that look for alternative ways to use Google at their advantage.

In the last few months you might have heard about two campaigns carried out by two leading companies in the restaurant industry: Mc Donald's and Burger King. Both have used the logic of Google searches to promote themselves, addressing to a target of people (composed mainly by teenagers) that are used to watch TV with a smartphone in their hand, looking for information on the web. However, methods (and results) were very different.

The first to launch the campaign was Burger King, with an ad based on Google voice search. As all those who have an Android know, in order to activate the vocal search you only need to say “Ok Google” and then ask a question. Burger King decided to create an ad starring an employee who doesn't have the time to explain what a Whopper is (one of the best-known hamburgers of the company), so he activates the voice search on his Smartphone, asks what a Whopper is and gets an answer (which is the definition of the Whopper given by Wikipedia).

The idea has caused many problems to Burger King, though: first of all, the definition taken from Wikipedia results clearly modified by the company to make it more promotional and persuasive in comparison to the typical definitions given by the free encyclopedia, which have to be neutral and unbiased. Look at both definitions, before and after the changes made by Burger King: 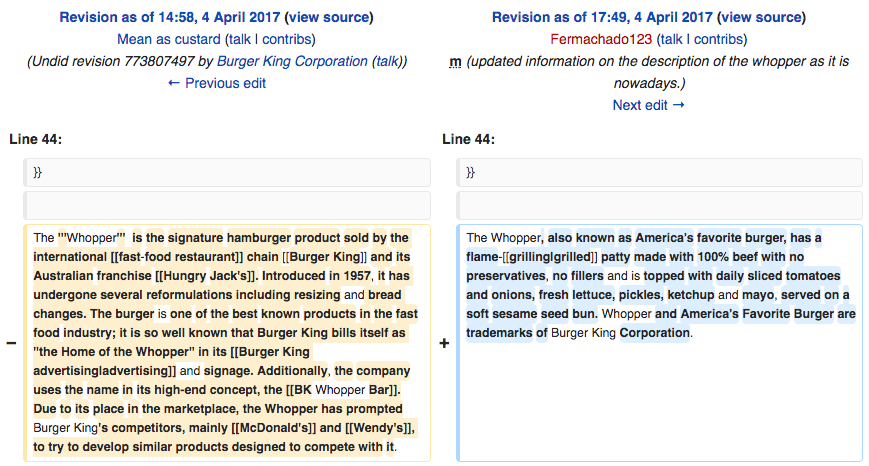 Alterations did not only concern the page dedicated to the Whopper on Wikipedia, but also Google searches: all those who were watching the ad having their smartphone near them, indeed, had the search for Whopper activated by the voice command “Ok Google” pronounced by the actor. This disappointed a lot the giant of Mountain View (which had not been made aware of the campaign) leading Google to the decision of deactivating the search string pronounced during the ad on all the Android phones.

What might appear to be an original idea turned to a disastrous campaign. What were the mistakes made by Burger King? The main mistake, approaching the world of Google, was forcing the users' searches, going against Google philosophy. The most famous search engine in the world, indeed, is more and more focused on natural results, and this is a sort of battle to give users consistent and personalized results. As a consequence, the fact that Burger King activated a search independently from the people's intention was something that Google could not ignore.

Not to speak about Wikipedia: have you ever tried to create or edit an entry? Checks and rules are very strict, just to avoid the publication of promotional contents and to give objective and unbiased information, and even the most famous brands in the world cannot go against that. The free encyclopedia wants to stay free, and it does not compromise even with the marketing manager of an important company like Burger King.

Mc Donald's: that place where coke tastes so good

Mc Donald's idea showed to be much better. The company, indeed, used the real results on Google in its favor, and what is even more important, it did so without forcing the ad watchers to make a search on Google, unlike Burger King. The ad spread by Mc Donald's, which was conceived to promote a special offer on drinks, features famous writer and comedian Mindy Kaling, who claims that, according to some people, there is a place where coke tastes so good, and she encourages spectators to make a Google search with the query “that place where coke tastes so good”.

The result of the search is emblematic. Obviously, if you make the search now, you'll find out that the SERP includes also articles about the ad, but if you filter results by date, omitting the span of time after the launch of the ad, you cannot but notice that there are articles dealing with the fact that Mc Donalds's coke tastes different: 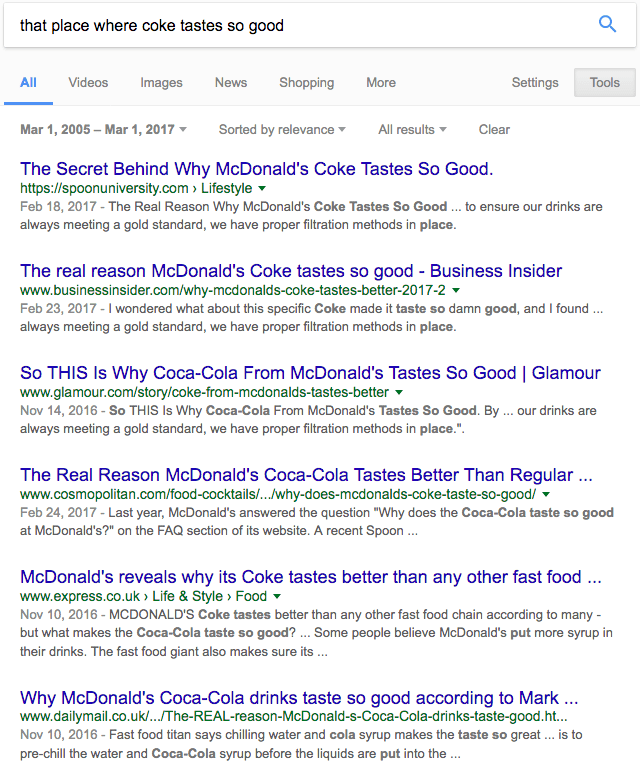 What did Mc Donald's do? And why wasn't it “punished” by Google, although it used its search results for self-promotion? First of all, the idea by Mc Donald's is good because it does not force the users to make the search (of course Mindy Kaling encourages them to do that, but nobody forces them); secondly it uses a natural result (maybe boosted a bit) that already appeared on Google SERPs. The fact that Mc Donald's coke tastes so good, indeed, is a well-known and objective fact, explained by the special treatment that the drink undergoes in Mc Donald's restaurants. Unlike Burger King, Mc Donald's hasn't faked the results and it didn't have to force the spectators to find something on the search engine.

At this point a consideration needs to me made: looking at the results of the search, you can notice that many articles leading with the taste of Mc Donald's coke are rather recent, thus it is licit to think that, before the launch of the campaign, the company spread some news and articles on this subject. In this way, as users began to ask Google the question suggested by the ad, the search engine was able to find, and show, some articles that could answer exactly that question. However, it is alto true that the taste of Mc Donald's coke was already a popular subject on the web. In other words, Mc Donald's hasn't invented the news, it was only good to intercept, ride and boost a trend that had appeared on the web. 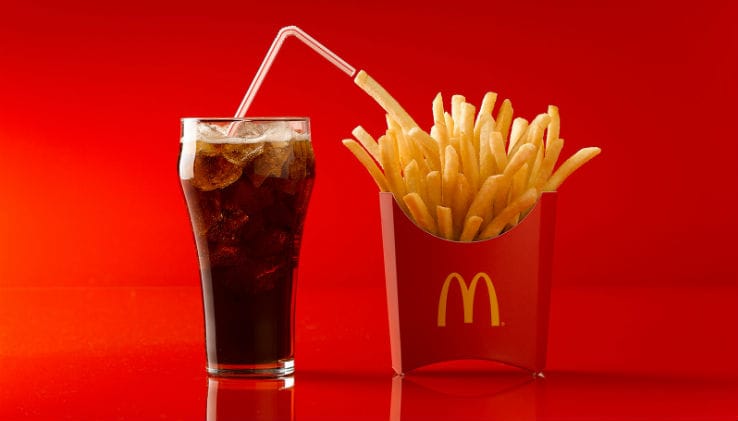 Mc Donald's has succeeded in using the organic results of Google for self-promotion; moreover, it did so without mentioning the brand. Throughout the ad, indeed, the logo and the name of the company never appear, and the only reference to the brand is given by the colors used in the ad: the yellow dress of Mindy Kaling and the red background, indeed, remind us of Mc Donald's identifying colors. A great result for the company, which has showed to be so recognizable that it doesn't even need to mention its name during the ad (on the contrary, it has used the name of two other great brands, Coca Cola and Google, to promote itself and demonstrate its authority), and above all it has proven to be able to play with the logic of Google without exceeding the limit.