China and Football: opportunities and challenges 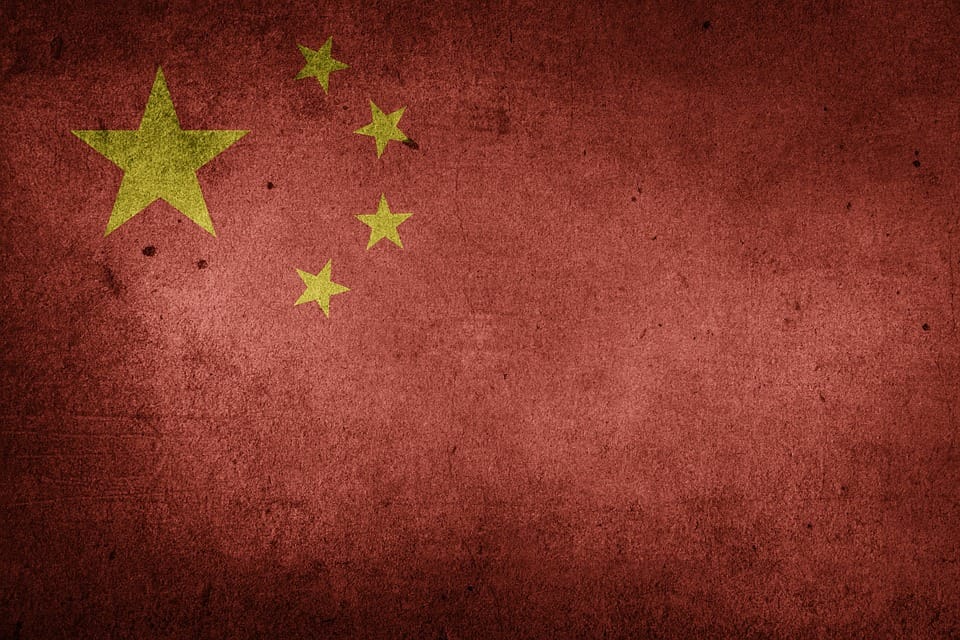 Chinese President Xi Jinping has never hidden his love for football, on the contrary he made the football explosion in China become a highlight of his government. Chinese fanbases for international teams such as Manchester and AC Milan have grown significantly while supporting their local Chinese league, which is getting richer and richer. How do leading football teams attract Chinese fans with communication strategies?

Enthusiasm grows, along with the World Cup dream

Trinidad & Tobago. Qatar. Armenia. These are not well-known countries regarding football, but they come before China in the FIFA ranking, being China ranked 68th. The recent victory against South Korea at a World Cup 2018 qualifier attracted at least 70 million television viewers - it is the most watched broadcast in China over the past 5 years.

Where does this enthusiasm come from? President Xi has an ambitious plan which goes far beyond the current circumstances of Chinese football. In this sense, the selfie taken together with Aguero and former UK Prime Minister David Cameron is iconic and is a proof of Xi’s strong passion and determination towards football. 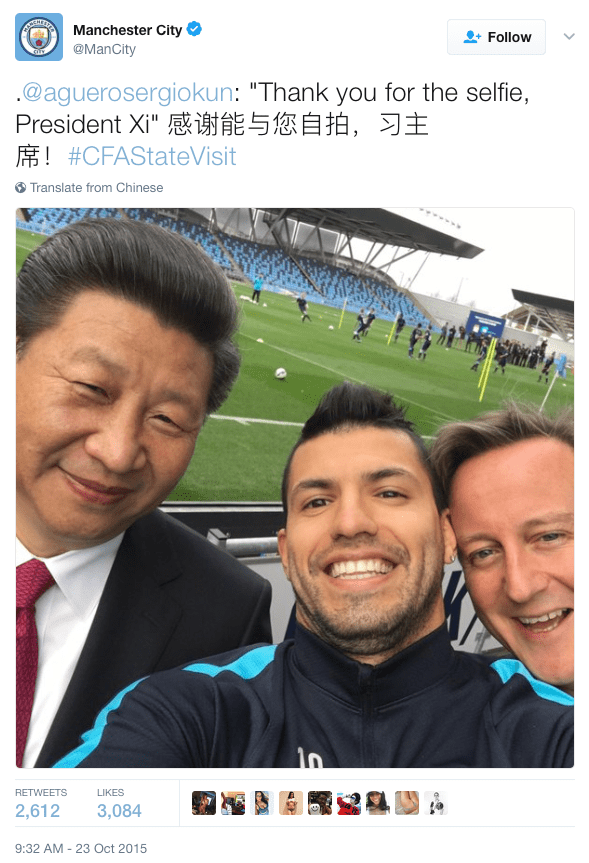 The plan signed by President Xi in 2015 reveals an aggressive strategy aiming to transform China into a “world football superpower”. The plan includes the building of 20,000 football schools and 70,000 new fields in China; yet it also promotes collaboration with Europe, where Chinese government has made some major investment.

The growing popularity of football and the explosion of middle class in China represent a right time to enlarge Chinese fanbases. Yet more efforts are required beyond mere summer tours and the relationships with fans should be nourished through daily conversations on new trending media.

A digital presence is vitally important

As of the end of 2016, more than half of China’s population is connected to the Internet — nearly the entire population of Europe, according to China Internet Network Information Centre. In addition to having the largest Internet user base in the world, McKinsey found that China also has the most active environment for social media, where Chinese netizens spend almost half of their time online on social networks.

Building a strong online presence is vitally important for European teams looking to broaden appeal for potential sponsors and to allow Chinese fans to truly become a part of the community.

Overall, Manchester United ranked the most influential football team in China, according to Red Card 2017, the sixth annual report released by Shanghai-based consulting agency Mailman Group. That is not surprising as Manchester United is the European pioneer in Asia.

With 390 million monthly users, Weibo has evolved to be an all-in-one platform for microblogging as well as picture and video sharing. The top clubs all have a well-balanced mix of content on Weibo, such as live commentary on matches, sharing quotes from popular players, polls, quiz, etc. What sets FC Bayern ahead is their sustained effort to highlight the history and glory of the team and their players. A good example is the post published to celebrate Neuer’s birthday, which includes the most important moments in its careers and invites fans to choose their favorite one. 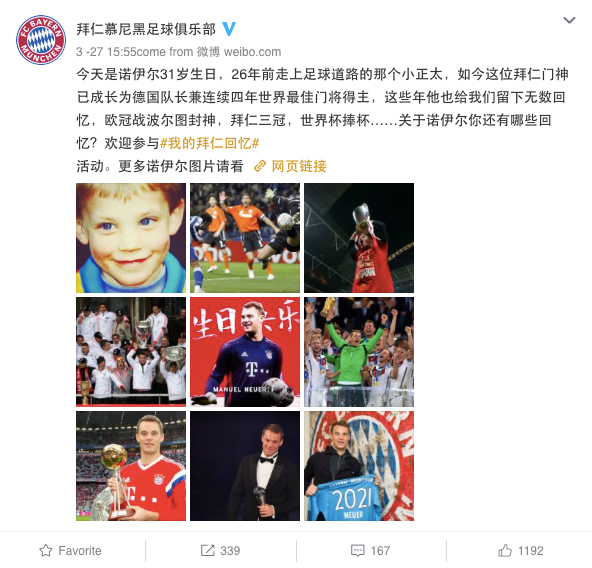 Chinese fans favour authentic and personalised content in line with the Chinese culture, because this makes them feel nearer to the team. An example in this sense is given by AC Milan - 7th team in Mailman ranking and first team among the Italians: before China had a World Cup qualifier against Iran, AC Milan published a post to wish the best of luck to Chinese team including the traditional koi fish, which symbolizes fortune.

Further, clubs must shape a distinctive tone of voice and be consistent in their use of language. Right after Barcelona’s 6-1 win over PSG, Barcelona FC celebrated the miracle on Weibo through an engaging and personable post with many emojis, exclamations and a celebrative language.

A follower on WeChat is much more valuable than on Weibo partially because of the app’s intimate nature: WeChat is the most popular app in China with over 800 million monthly active users and an essential part of the modern life of Chinese netizens. According to the Mailman report, “Football clubs should use WeChat as their CRM platform in China.”

Clubs on WeChat are able to keep their fans informed with detailed content that is easy to read on smartphones. In average, clubs pushes one article a day to its subscribers incorporating text with pictures, videos, polls, etc. 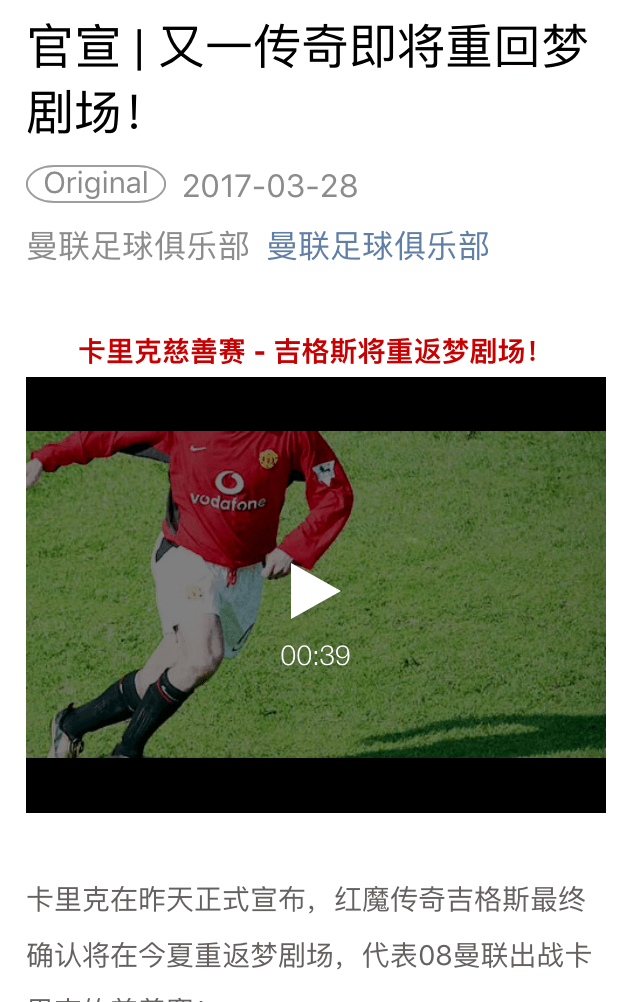 Among the top European teams, Manchester United has been taking the lead with the largest WeChat fan base and 0.7 million monthly reads. The club’s content varied from official announcements to analytical commentary of matches, from inspiring stories about their players to upcoming challenges, but there is a constant feature: appealing titles to capture readers attention, such as “Another Legend Will be Back to the Dream Theatre”, in the image below. 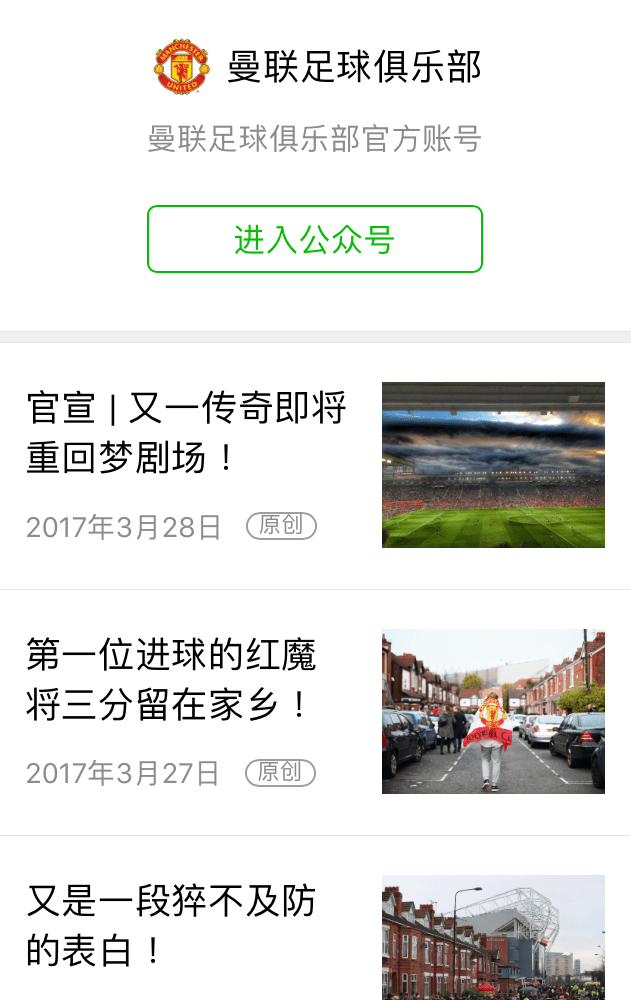 The ingredients of a winning strategy

The digital space in China is extremely competitive and dynamic, and there are many elements that clubs need to consider online to create relevant and engaging content. Essentially, this is a real branding challenge. Why a Chinese fan choose to support a European team over another one? Usually, most of them do not have connections to the territory, culture or family - the emotional bond that brings people in Milan together to support AC Milan or Inter, for example. The short answer is that the football passion of a Chinese fan is much of a choice of brand. And the brand, in the world of sport, is closely linked to two elements: heroes, i.e. the most iconic players, and myths, i.e. team history. As a consequence, the digital strategy needs to engage with champions and tell compelling stories that create emotional bonds with fans.

The objective is maximising fan engagement integrating offline and online activities.In addition to promoting offline events, e.g. summer tours to China, on the Internet, clubs should also focus on bringing all of the excitement of offline activities to the online community and spark interesting discussions on a daily basis.

Areas for innovation surely exist, and the increasing value of live streaming on Chinese social media is only one of the opportunities, which has been evidenced by the recent partnership between Liga, the main Spanish league, and Weibo, which creates a weekly streaming of highlights specifically designed for this platform.

The Chinese market is already a major priority for many teams of the Old Continent; the increasing enthusiasm and the investment flows led by the government, together with the great number of communication channels, tell us that this trend will last for a long time in the future.