The NFL and its world-class organization lands in London

In order to understand the impressive business volume of the National Football League, you can’t help but start with the incredible amount of passion that American sport fans feel for football.
We are indeed talking about 185 milion of Americans that declare themselves football fans, accounting for 60% of the USA population; moreover, the audience is as wide as it gets, with 45% of football fans being women.
During last fall, 45 of the 50 most watched TV programs in the USA were NFL games. The 50th edition of the Super Bowl, the NFL championship match, got 114.4 average American viewers.
Since its first version in 1988, football videogame “Madden”, produced by EA Sports, has sold more than 100 milion of copies; in addition to that, football is the most popular sport among Fantasy sports gamers, with 73% of them playing with NFL teams.
We wanted to underline how football is clearly the most beloved sport in the USA, and we are sure that after reading those numbers you have no doubts whatsoever.

The global success of the top sports league in the world, the NFL, is the most obvious consequence to the insights we just showed you. NFL has reached the 13 billion mark as for league revenues in 2016, which is impressive as it stands but it sounds even more relevant if you compare it with NFL’s sisters MLB (baseball, 9.5 billion), NBA (basketball, 4.8) and NHL (hockey, 3.7), or even the prestigious English Premier League (5.3). 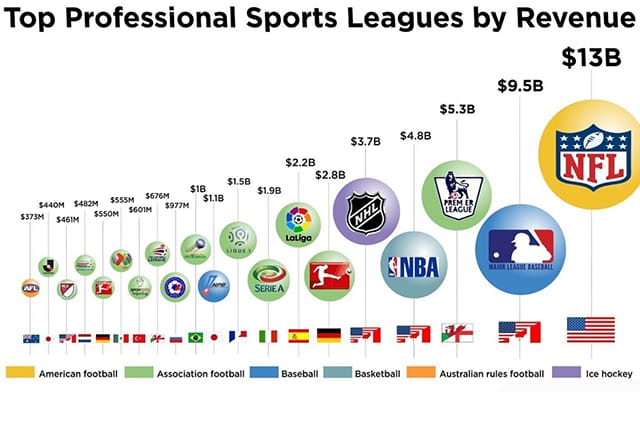 Broadcasting rights are the biggest revenue stream for NFL, as you may imagine. They reached 7.4 billion per year, thanks to the latest deal with NBC and CBS for the rights to broadcast “Thursday Night” games, that sees each network pay 450 million dollars per season (45 million per single game). On the top of that, deals with ESPN and DirectTV, along with radio partnerships, allow each of the 32 teams to start the season by receiving more than 200 million dollars without selling a single jersey, ticket or beer.
We submit to your attention a graph from Business Insider where you can see the exponential growth of broadcasting rights in the last decades: as you can note, every time NFL sits down with networks to discuss renewals, they obtain a consistent raise – and sometimes a huge raise. 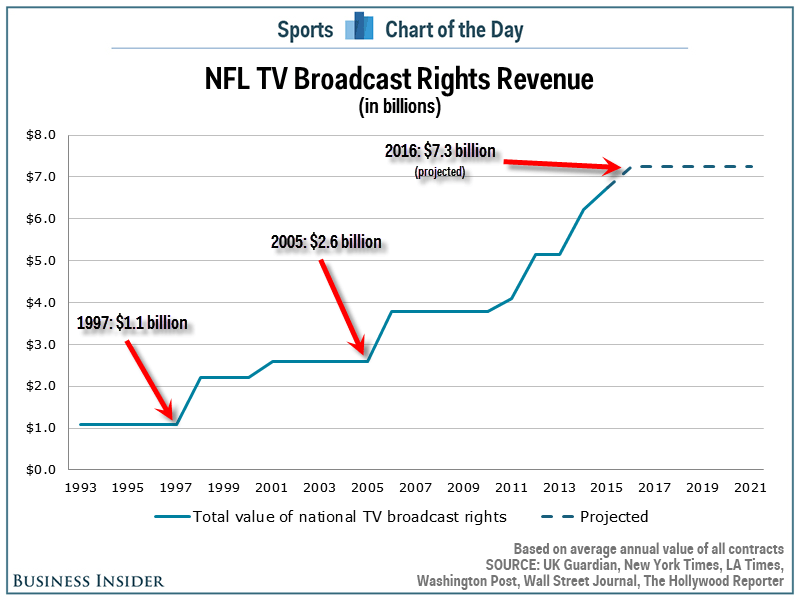 (The graph here has 7.3 bln for total broadcasting revenues, because initially the Thursday Night deal was thought to be on a 800-million per season base)

The 32 teams that take part in the NFL season can also count on match-day and merchandising revenues: they don’t have any attendance problem, if we think that last season the team with the least average attendance were the St. Louis Cardinals (that moved to Los Angeles from 2016-2017), with 52.402 fans per game. At the other end of this ranking we find the Dallas Cowboys, with more than 91.000 fans per game. If we take into consideration that the average price per ticket for an NFL game costs 85.83 dollars (2015 data), we can easily get how teams make money also from match days.
All of that has inevitable effects on the teams’ valuations, which has reached the average amount of 2.34 billion per team in 2016 according to Forbes, growing 19% on the year before. Even this ranking is led by the Cowboys, with the team owned by Jerry Jones valued at 4.2 billion.
Consequently, the football star-players earn a lot of money, especially Quarterbacks: the most paid is Drew Brees, QB of the New Orleans Saints, who gets 31.250.000 dollars per season, followed by his equal Andrew Luck of the Indianapolis Colts (30 mln per season).

2005, October the 2nd: a celebrated day in National Football League’s history, as the first NFL game outside USA borders was played that day between Cardinals and 49ers at the “Estadio Azteca in Mexico City.
To play exibition or regular season games in key markets has forever been a common pattern for sports league to become global brands: let’s just think about soccer teams traveling the world during summers, or the NBA “Global Games”, or even the “Basketball China Tour” by Euroleague.
The bond between London and the NFL, after the first game played at the Wembley Stadium in 2007, has become stronger during recent years, making the English metropolis the real football hub outside USA; starting from 2014, in fact, NFL regular season games are scheduled in London, and if you look at the attendance data, European passion for football doesn’t give any sign of slowing down. 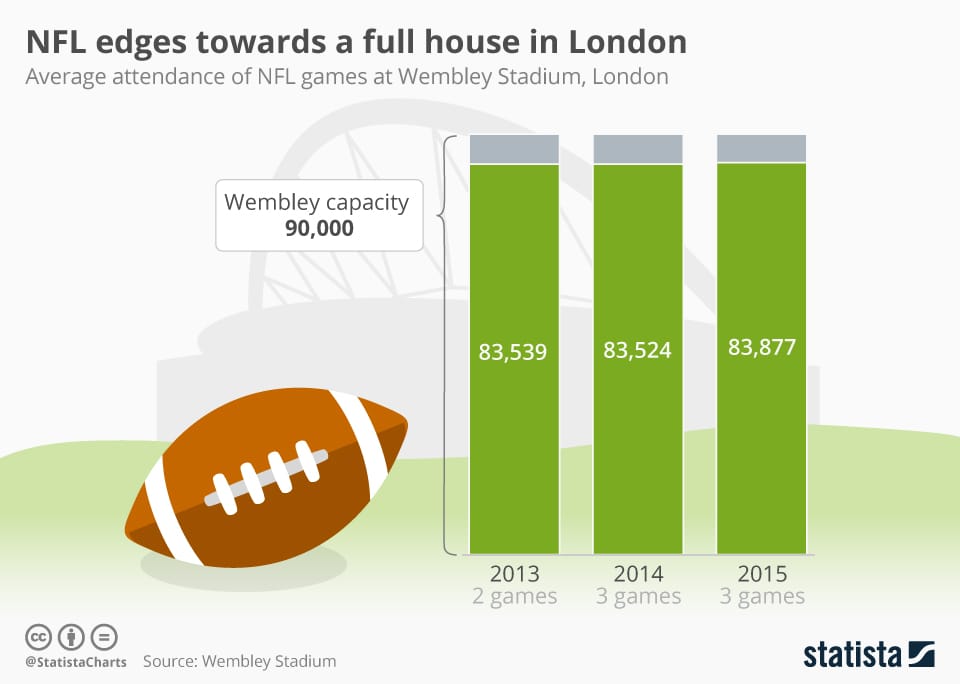 The “NFL International Series” are a brand that goes well beyond the three regular season games. NFL’s ability to create a great atmosphere around the event is amazing, and you can just check the “NFL on Regent Street” activation, or the number of entertaining activities you can enjoy before, during and after the games.

We can easily get why NFL teams travel the Ocean to land in Europe, based on the overwhelming number of growth possibilities in terms of the sport’s popularity. Everything suggests that this process will eventually stop: since 2016, in fact, the NFL will explore a new venue, the Twickenham Stadium, to have of its usual London games, and they are back in Mexico City for a fourth “International Series” match. What’s more, they are evaluating the chance of going on tour in Germany, Brazil and China.
After talking about all NFL global plans, we take time to remind you about how NFL organization is unparalleled in allowing its teams and players to be taken care with the same grade of attention like they are at home. Teams flying to Europe take with them everything they need, and not only the typical medical supports, clothes and jerseys, but also (like the New York Jets did) orange glasses to help players sleep well or even 350 rolls of toilet papers. “We’re basically trying to replicate everything that we’re doing here over there” as for Aaron Degerness, Jets senior manager of team operations.

We can only acknowledge the well-being of the National Football League, the top sports organization in the world.