BERT, the algorithm that rewards content on the web 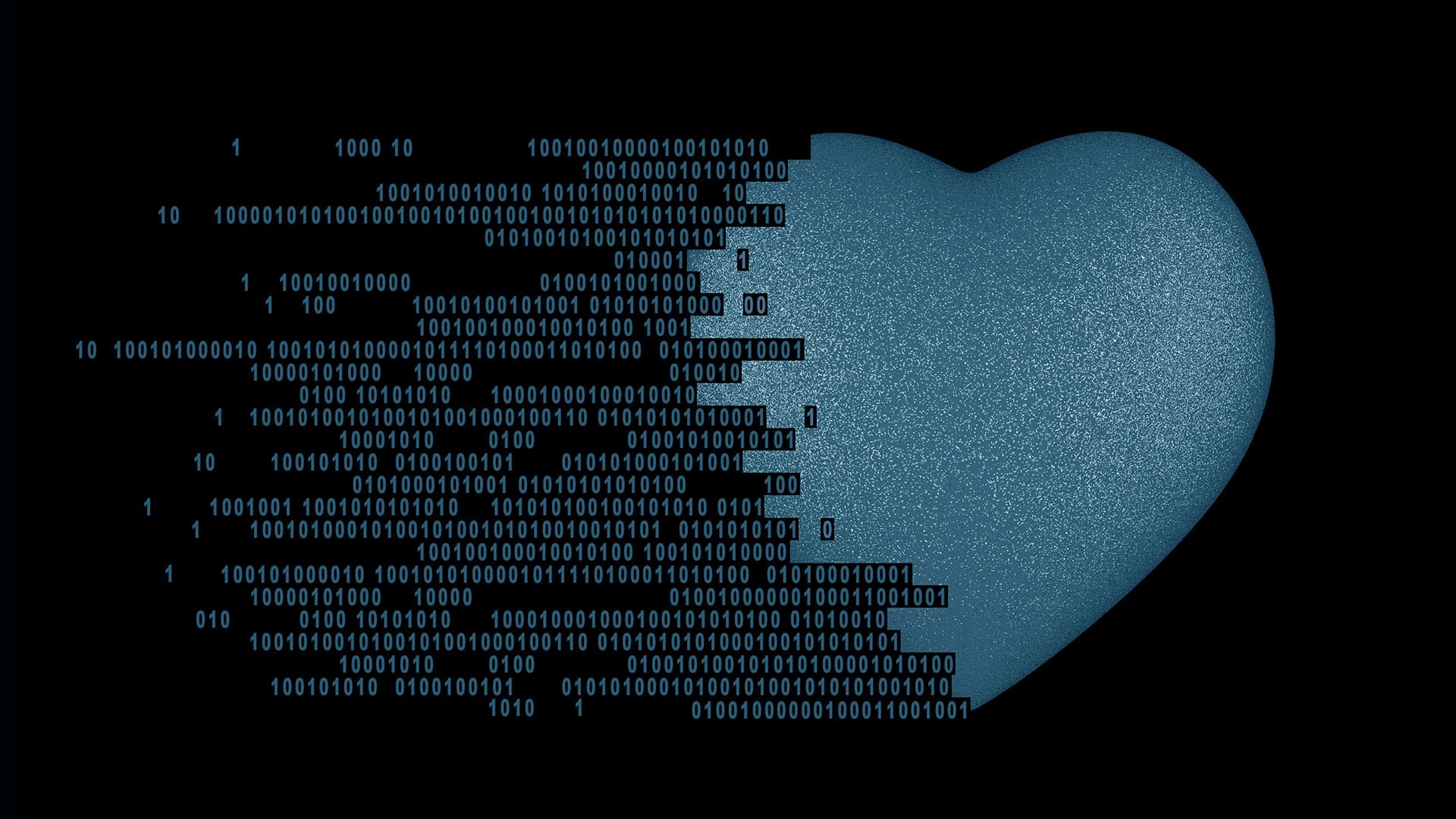 Bugbear and guide at once, Google has been marking the evolution of content editors and copywriters in the last few years (at least when it comes to digital). BERT’s launch, on the 25th of October, is only the latest chapter of the story.

There’s nothing new in that: since Google exists, not only SEO specialists, but also people that deal specifically with web content writing know well that they have to respect Mountain View’s dictates to hope that their contents are found on the web (thus read). There wouldn’t be anything wrong in that, but what copywriters didn’t like that much at the beginning of the liaison between SEO and copywriting (and if you deny that, than you’re not a copywriter) was the passage from he concept of contents to that of container: for a while, indeed, we were asked to write articles that were, let’s go straight to the point, containers for keywords and links, useful to increase the link popularity of a given website. 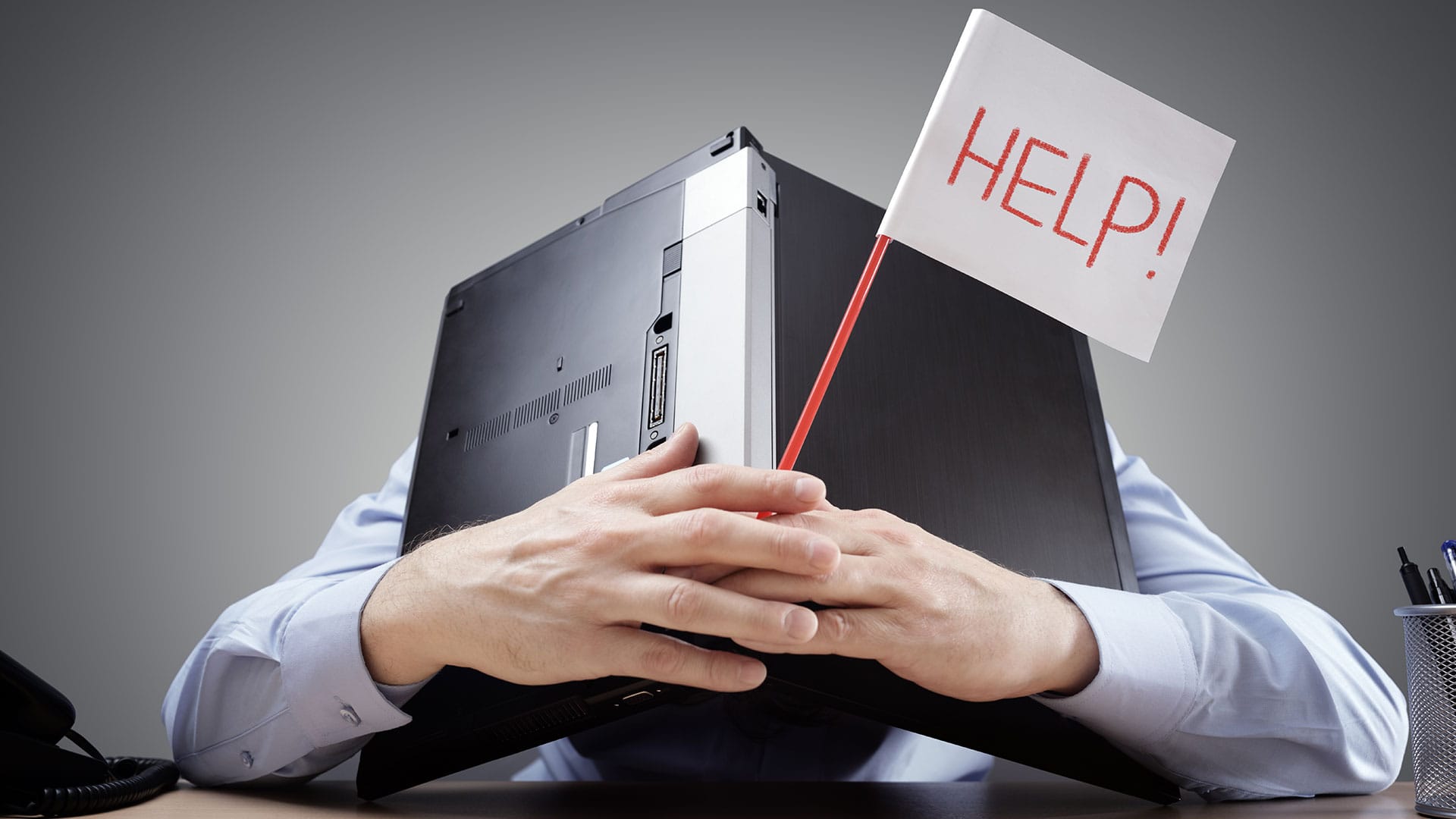 If you are not a newbie you remember (without any regret) the times of Article Marketing: articles distributed in dozens of aggregators websites containing links and anchors that challenged syntax and grammar at once (that’s not nice for copywriters). You could make any effort to write the most exhaustive, rich and original article possible, but in the end what mattered was that the search engine was able to recognize the link inside a text characterized by contents that needed to be similar to those of the website you were promoting, and that these links were connected to anchors with specific keywords, to the detriment of the structure of the sentence.
Okay, I’m making it simpler than it was, but we cannot deny that, ten years ago, the quality and naturalness of contents were not the dominant thought for the people that wanted to promote a website.

In the end comes BERT 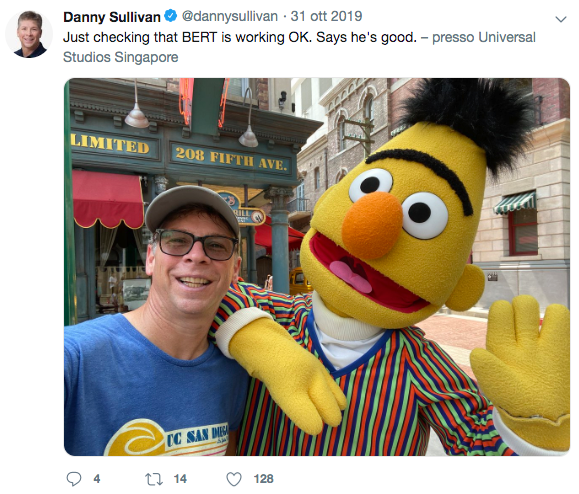 Then, as happens in the most beautiful fairy tales, something began to change. And we don’t need to wait for the 25th October 2019, with the launch of the new algorithm, one of the few that have the name of a person and not of an animal: BERT (acronym for Bidirectional Encoder Representations from Transformers). Initially active only in the States (in other 70 languages in the world starting from December), BERT is the algorithm that is based on machine learning and is aimed at making a change on the search on the web, getting nearer to the real intention of users and, above all, learning to understand better the natural language, the language that people really use, and not the language of some web contents that want to ingratiate themselves the search engines but end up neglecting “human” readers.
This means that, when we will make a search on Google, the search engine will be better in interpreting what we will be asking for (it will understand also the intention that we don’t even know to have) and, consequently, in showing consistent contents, rewarding the pages with relevant contents more than the single keywords used for the text optimization, the subtitle and so on. That’s not all: according to a recent piece of news, BERT will be used by Google to better organize the top stories on the SERP regarding a current issue: it will not limit itself to show some news connected to a query anymore, it will group them into more specific sections. Also in this case the objective is making it easier for users to find exactly what they are looking for.
It is self-evident that, for those who write, this means basically one thing: write (or continue writing) relevant and high-quality contents, and you will be found by the people that are looking for what you offer.

Quality rewards (and this is not something new)

I think that nobody was flabbergasted by this update: this is certainly something to take into consideration (especially if you thing about what it is expected to do in the future!), but it was not out of the blue. For years Google has shown us the direction to follow, inviting us to opt for high-quality contents, for years it has repeated what its mission is (showing the most interesting and relevant contents possible depending on the query), and for years, in order to achieve this result, Google has done anything possible to understand not only the meaning of single keywords, but also the connections that there are among them, to be able to understand whole sentences. BERT will give a great help in the interpretation of the connections between words: in Google official blog, in the article that announces BERT’s launch, Pandu Nayak makes things clear, claiming that “at its core, Search is about understanding language”. 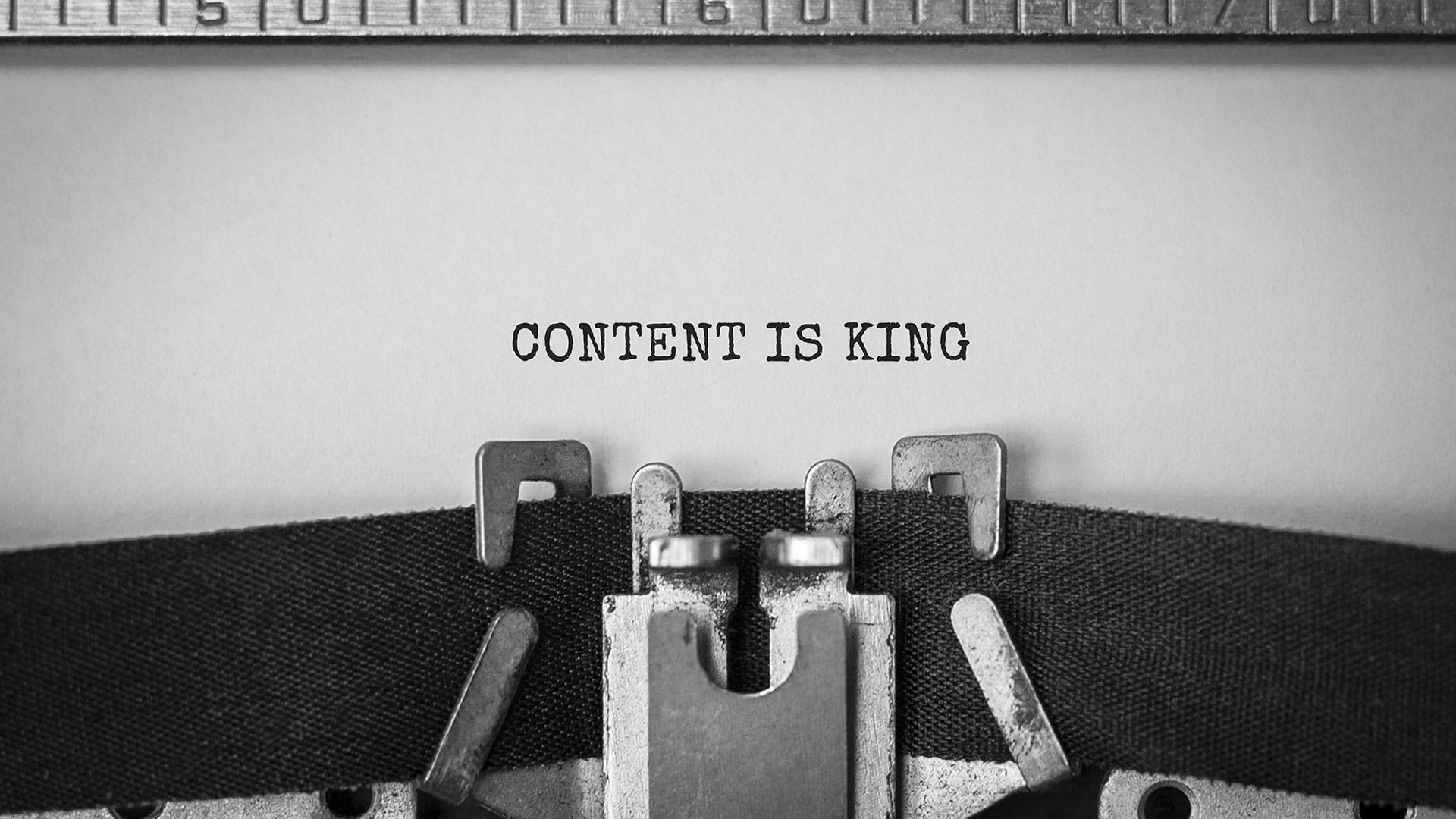 The first thought deriving from BERT’s launch might be: now we can restart writing in a natural way, paying no attention to keywords and Co. , since BERT will understand that what we write is exactly what a given user is looking for.
But there’s something extremely wrong in a thought like this: if we have written our contents only from an SEO point of view so far, thinking only of making them readable by the search engine and not by human readers, this means that we have not been forward-looking and that we have not paid attention to what Google has continued to tell us all this time. On the contrary, those who are used to write web contents paying attention to quality and not only to keywords are probably already doing something positive. BERT certainly marks an important stage, but it is naturally included in a sequence of changes and implementations that Google has been carrying on since it exists. In 2009 Eric Schmidt already claimed: “Wouldn’t be nice if Google understood the meaning of your phrase, rather than just the words that are in the phrase?”.
An answer given by Danny Sullian on Twitter is emblematic in this sense, as he claims that ”there’s nothing to optimize for with BERT”, nor strategies to change. Google’s objective is still the same: rewarding high-quality contents. 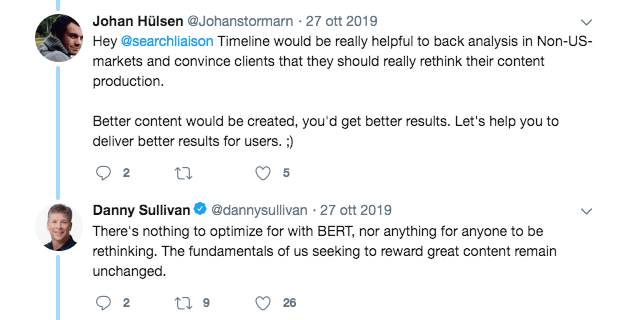 What about Google’s zoo? In 2011 Google Panda was launched with the mission of reducing the ranking of websites with low-quality contents (because they were copied by other websites, or because they were not useful for readers), promoting those sites that were based on original and in-depth contents. Next year it was Penguin’s turn to carry on Google’s quality crusade, punishing spam websites affected by keyword stuffing and other black hat techniques. The most meaningful novelty came in 2013, with Hummingbird: Google’s new algorithm did not only reinforced local searches, it also boosted the human search, succeeding in understanding more precisely the users’ intention behind the query.
These and other updates that have been carried on by Google were part of the same plan that includes also BERT: in this sense the latest innovation coming from Mountain View is certainly surprising, especially for the potentiality it has, but it is less so for those who deal with contents. Writing high-quality contents, in a natural way to make them appreciated also by users and not only by search engines, is a mantra that has been repeated for years: for some time now we have been grateful to Google for the efforts it is making (and will continue to do) in this sense, as users, of course, but also and above all as copywriters!