Tokyo 2020: the most watched Olympics ever with 3 billion digital spectators 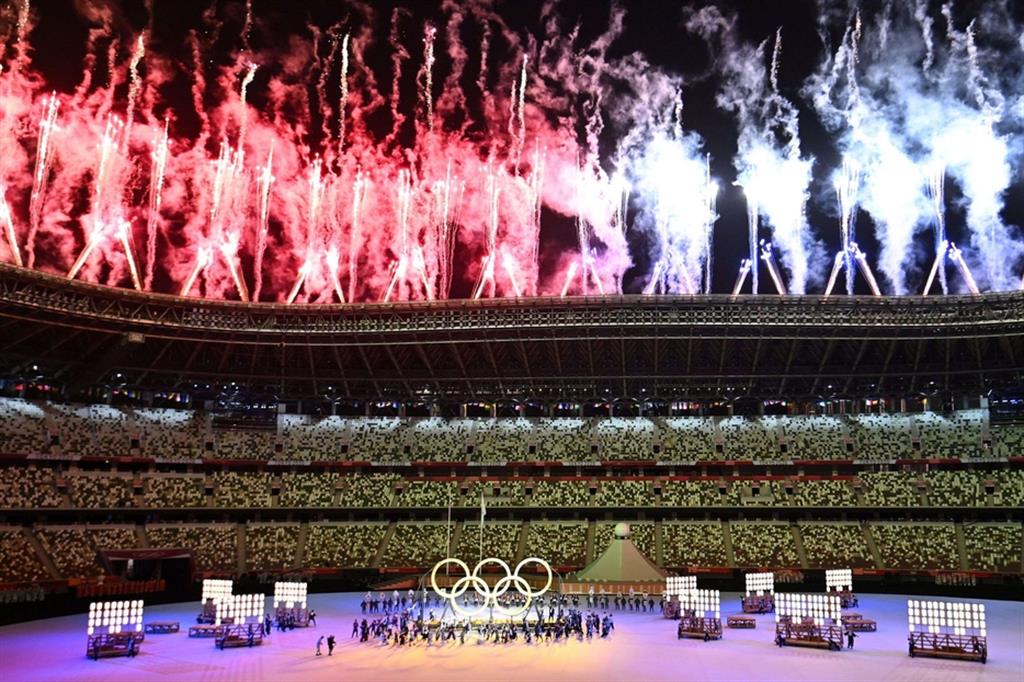 The Olympic Games Tokyo 2020 have reached an audience of over 3 billion people. The IOC (International Olympic Committee) revealed that during the last IOC Executive Board meeting. A dedicated analysis was carried out on behalf of the IOC and all the results can be found in the Tokyo 2020 Audience & Insights Report. 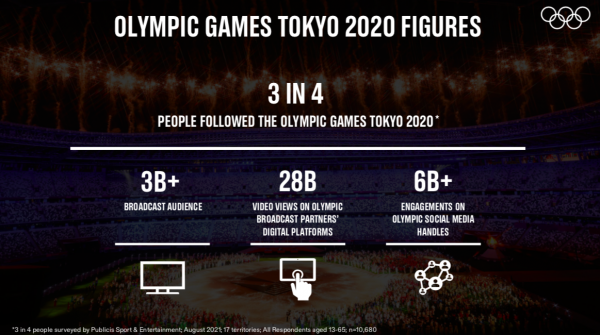 The Olympic broadcast partners’ digital platforms alone have generated 28 billion video views in total. It’s a record number that pictures a 139 per cent increase compared to the Olympic Games Rio 2016. This result reflects the changing media landscape and the designation of Tokyo 2020 as the first steaming Olympics as well as the most-watched ever on digital platforms.

The last Games in Tokyo marks a turning point in relation to the past with a considerable amount of content available to fans worldwide and accessible from several devices: TV, digital streaming, websites, apps and social media. In total, the TV coverage increased by 33 per cent compared with Rio 2016, while the digital outputs rose by 34 per cent. This lets the fans around the world live to the fullest the emotions and the excitement of the Games: according to the survey three in four people followed the Olympics. An increasing number of sports fans interacted driven by the new technologies and digital innovations. This made these Olympic Games the most engaged ever.

Also, part of this success comes from the official website of the Olympics and the app Tokyo 2020: together they attracted more than 196 million unique users, drawing more than three times the traffic generated for the Olympic Games Rio 2016. Even the results achieved on the IOC social media handles don’t go unnoticed: they generated together 6.1 billion engagement (including video views, shares, comments and likes).  Also, independent research on consumers revealed that the Olympic Games and the five rings remain the most appealing sports and entertainment property in the world, while almost two-thirds of the respondents consider Tokyo 2020 a success. 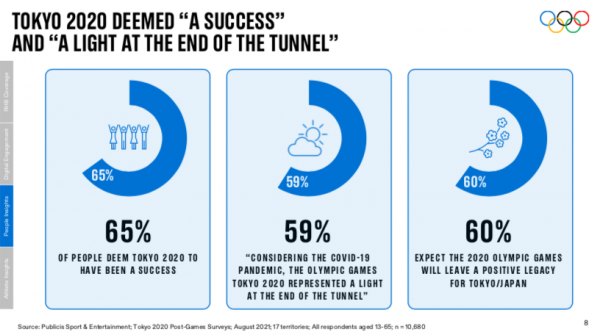 The Games have truly represented “a light at the end of the tunnel” in the COVID-19 pandemic scenario. 59% of the interviewed confirmed what was intended by the IOC President Thomas Bach, back in March 2020. Furthermore, the study conducted has highlighted that the Games are perceived as a “force for good” because, for the majority of the people involved, the event is socially responsible as well as been managed in a sustainable way.

The survey conducted with the athletes follows the positive results trail: it has demonstrated that the participation at the Olympic Games Tokyo 2020 was relevant for them. 93% of the athletes rated important “competing in the biggest multi-sports event on earth”, the 84% valued important “to become an Olympian” as well as the 80% estimated important “to win an Olympic medal”.  The athletes seem to be satisfied with their experience in Tokyo also from the Covid-19 countermeasures perspective. 89% has stated they were well informed before the event about the measures in place for the pandemic and, 82% has rated good the Covid-19 countermeasures within the Olympic Village.

As a result, there is no doubt that the Olympic Games Tokyo 2020 have been a triumph. Facing an adverse scenario, many doubts and countless challenges, Sport has overcome every obstacle and has proven to be stronger than ever before. The Games have been a landmark for many around the world, they were watched with admiration, union and hope for the future. The outcomes achieved confirm the extraordinary power of the Olympic Games that are able to connect people, communities and societies around the world as no other event can do.