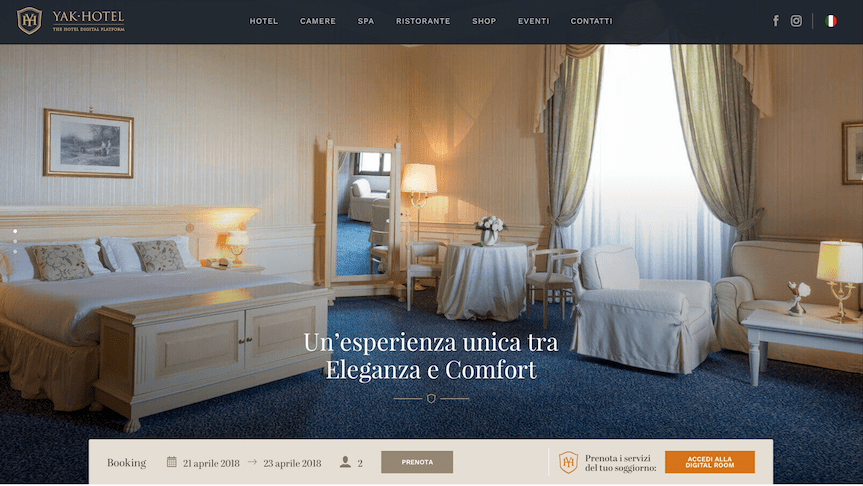 Let’s say that this wouldn’t be the classic article that starts from an alarming premise and offers the next best solution for your business.

It would not, but it is to a less extent. And it couldn’t have been different.

First and foremost because World Forum Economic 2017  Travel & Tourism Competitiveness Index (which you can download here) puts Italy as 104th, out of 136 countries, for “Effectiveness of marketing and branding to attract tourists” with a constantly worsening trend from year to year.
Something that, for sure for professional bias, but mostly by observing the growing trends (especially in terms of incoming) by those countries that have invested more, in recent years, in communication, we put among the priorities to be addressed.

In addition to that, let’s say that there are more than just a couple of good reasons to consider tourism as a huge but potentially unstable sector and certainly not fully explored.

We have a medium-old accommodation system, according to the World Economic Forum report we are 64th for Quality of tourism infrastructure, a number of beds that are many times higher than the real needs (an easy parallel with the stadiums of football comes to mind) and a very deficient public transport system (just think that we are only recently in conversation about the first bus connection between Marco Polo airport and the seaside of Chioggia - currently, for a tourist who would to reach the "Little Venice" would take almost three hours, with a passage even through Padua).

The lack of a global vision

Hotels, museums and restaurants act in solitude instead of working together as part of the same territory . Rumors that come from the OGD tables, the new destination management organization, tell us of a chronic immobility due to dissonant interests and provincial selfishness.

This happens in a unique territory, with historical and architectural values and some natural complexes that are envied everywhere.

A question of honesty

Since the term "experience" has entered tourism dictionaries, we have begun to generate new and different expectations from the past. Selling a room, at a certain price, is one thing: the tourist tries to find as much information as possible, decides from photos and reviews if it will be worth it and finally will test if his choice was more or less correct.
Selling an experience is another story: it is about a promise, it’s sometimes is about improvising.
That can work once, but not twice if behind words there is nothing or way less than the perceived value by the customer.

An experience is a value only when it’s a good one!

In fact, the real risk is that if this “storytelling” turns out to be a whole bunch of lies, it could definitively compromises the entire business. In this sense, there is no coincidence, according to who’s writing, that Venice and the thermal complex of Abano/Montegrotto, of course for slightly different reasons, seem to suffer for the first time since a couple of years, following 2017 which was an important years in terms of numbers ( we talk about an approximate -20% in the respective high seasons - April / June for Abano / Montegrotto, June / August for Venice).

In fact, were these rumors to be confirmed, it would be the first setback for these two destinations after years of constant recovery after the crisis, and in contrast with the forecasts that, according to a recent CNA report, had indicated an increase average of 3.5% of foreign visitors  in our country, presences that last year reached 23 million and an income for the entire sector of about € 223 billion ( 13% of Italian GDP)

Nothing happens by design:  tourists arrive in Italy and besides having bought a room they relies on the net or, worse, on randomly decisions for everything they’ll do during their stay.

Because of that, we’re not able to lead their will to spend money to balance expectations and profits, but instead we leave them to often questionable and over highly-priced services - and Venice more than every other destination is affected buy this.

Which is bizzarre, to say the least, in particular in light of a new report done by Sabre Corporation, North American most important company specialized in tourism and specifically in booking tools for multiple tourism services, which for this summer season pictured an increase in expenses by European travelers of about 40%, with an average expense for ancillary services of over 160€ per person.

Therefore a chance to describe “the experience” in a more transparent and effective way does exist: the journey begins officially with the booking of an hotel room, so from that point on the Hotel has the chance to inform in a captivating way about its services and about what in the surrounding area someone may do and find, or about its services, and most important should provide the opportunity to book all of these things.

Sounds good, doesn’t it? But how to do it?

Well, low cost airlines gave us an answer a couple of years ago, turning the actual flight into just the meaning through which “capture” the client, who’ll ended up spending way more money into ancillary services (a better seats, additional baggage, insurance, transfer between airport and his destination or buying f&b).

Some chains, like Hilton, have already developed apps that allows clients  to program almost every aspect about their stay (people tend to prefer customized  experiences instead of packages done by others).

We’re talking about the possibility to set (early) check in and (late) check out, in some countries even without having to stop at the front desk, having a digital room key in your pocket through the app, to by ancillary services and all of this always having under control how much someone’s spending.

Exactly what is everything about our own DIGITAL ROOM.

Which is not an APP

One of the biggest apps limitation is their average duration.

If they have not a perceived utility, they will be delated as soon as they’ve served their purpose.
Hilton’s app, like some of other chains that link the client with a rewarding system based mostly on fidelity, will last longer because of that.

So, in order to keep the unquestionable strength of a tool which can boost sales, we’ve thought about incorporate it into the hotel website.

This allows to do multiple things:

- if effectively communicated, the Digital Room is another good reason to rely on the hotel website instead of going straight into booking.com, which does not sell all this sort of amenities, things that give a deeper perspective about the quality of the Hotel.

- linked to the booking code, the DIGITAL ROOM can be visited, and so used, even by those who have booked from an OTA portal, and it will give clients a good incentive to visit several time the hotel website

- with the DIGITAL ROOM, clients spending preferences can be tracked more precisely, preferences also based on provenance and age, and therefore the commercial strategies could be more precise

- we said earlier that the journey starts with the booking: establish some sense of trust with the client, sell with the proper tools and not rely on employee who are supposed to do different things than selling. 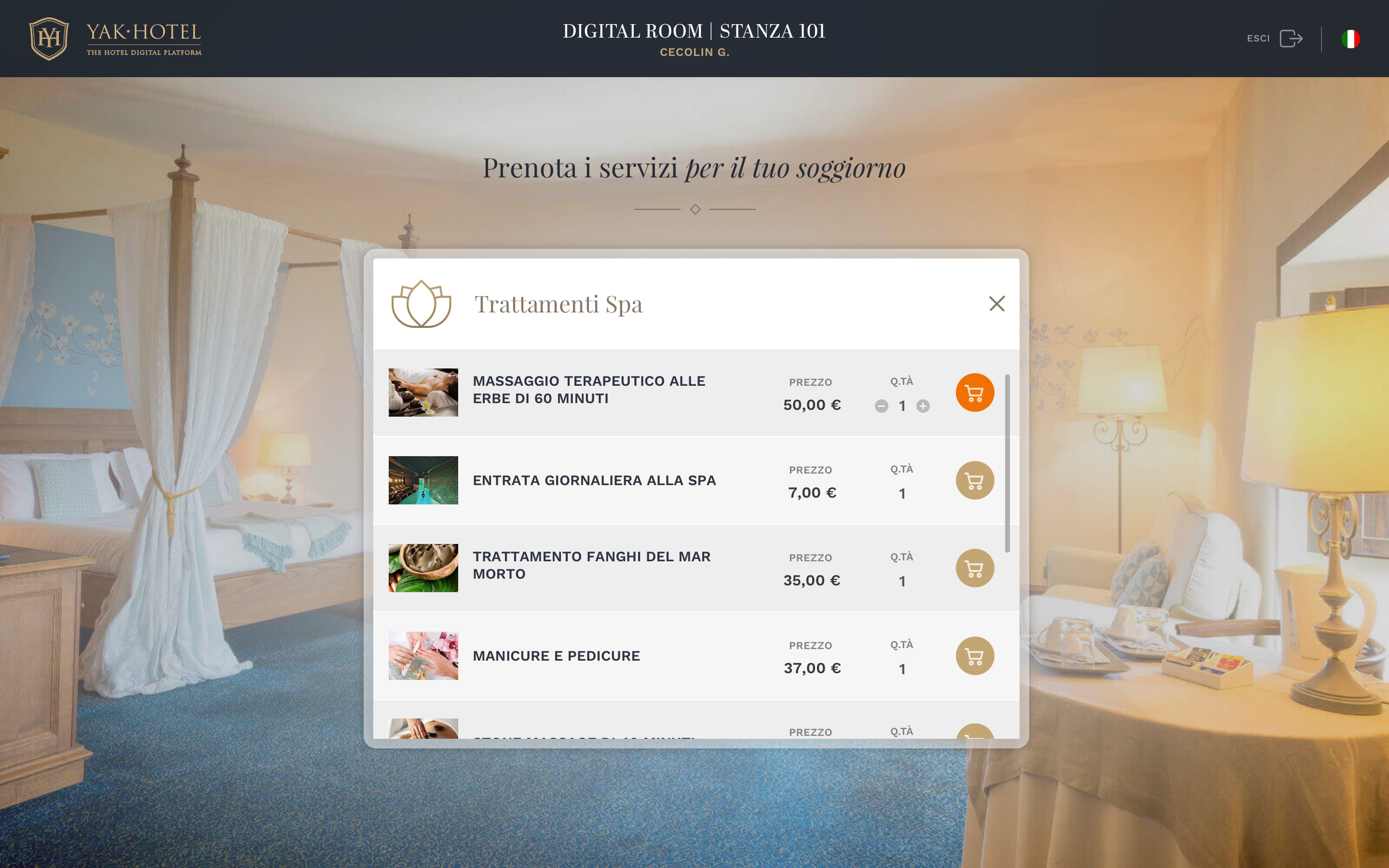 There’s something quite obvious but important to say: we’re not talking about the ultimate solution which will save your business.

The idea we’ve started from is that we can do nothing about the structural aspect, and being us a reliable agency we don’t believe that marketing means telling lies, so the most effective thing we can do is to give hotels proper tools to enhance it’s business and sell it consequently.

‘Cause lies have short legs, and Hotels which want only to raise the price per room but invest nothing, have legs even shorter.

To get more information, please write me: f.pomona@yakagency.com