Pandemic: the human aspect of retailers in full crisis 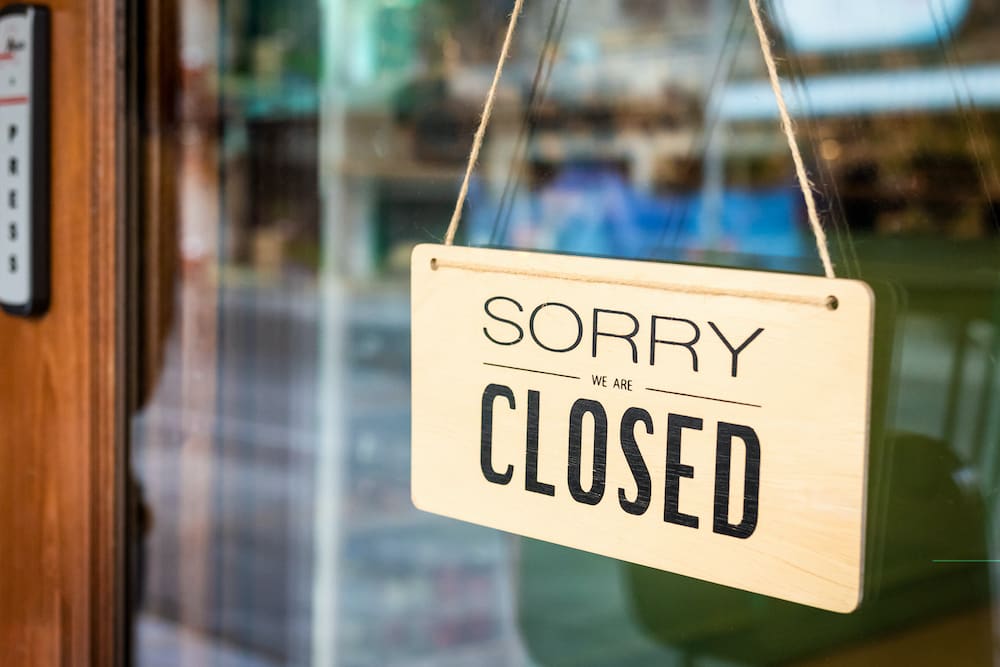 One month after the burst of Coronavirus in Italy, let’s have a look at its effects on every sector of the world of retail.

These days, as the contagion was spreading, we saw people going through different phases and the Government taking several measures.

In the first phase, when the virus arrived but there weren’t any substantial change in people’s life, there was a panic reaction which resulted in people making large stocks of commodities, especially health products and food.

According to IRI (one of the main analysis centers in the world), form the 17th to the 23rd of February 2020, the double-digit increase in sales up to 20% of hypermarkets and supermarkets in Veneto, Lombardy and Emilia Romagna was accompanied by a relevant peak in e-commerce sales in North Italy. 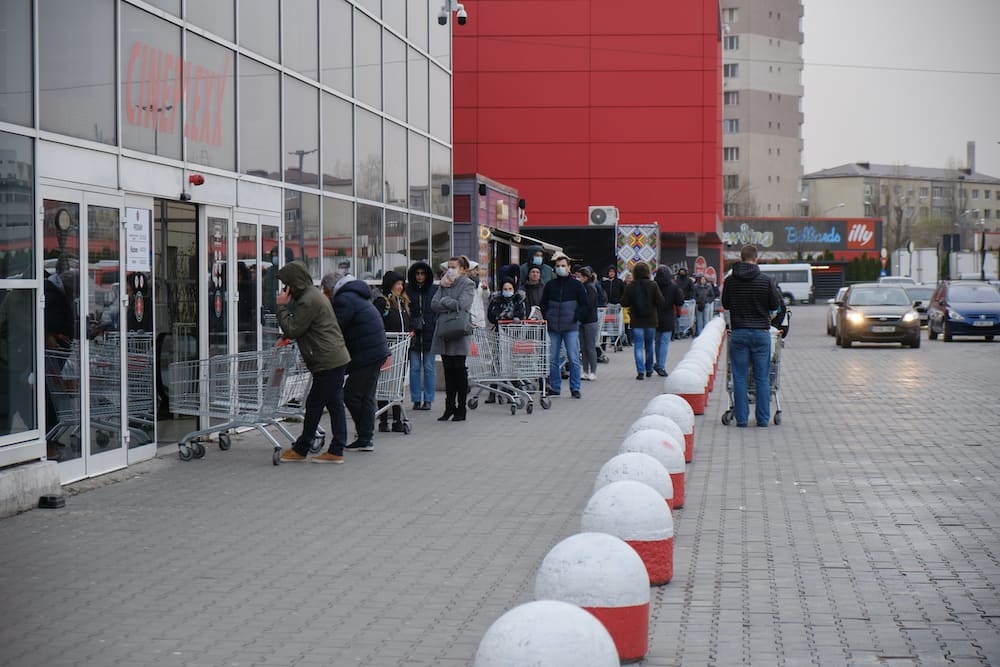 “It’s noteworthy how, in emergency situations, consumers have used all the instruments that technology and the channel operators have put at their disposal: on Sunday the 23rd of February, indeed, the carts of consumer goods that were bought online and picked up in the shops have more than doubled (+205,4%) in comparison to the previous year, going from an average incidence of 6% to over 14% of total sales.” - commented Angelo Massaro, CEO of IRI Italia.

All this has had a big impact on the supply and demand and, consequently, also on logistics. The impact was different for each category. Consumers filled they pantries with home care products, disease prevention products and non-perishable foods, drastically reducing the consumption of clothes and beauty and luxury goods.

While hypermarkets were not subject to major restrictions, all trade and restaurants suffered from a certain slowdown with the first reductions in timetables and recommendations for social distancing.

On the 24th of February Mario Resca, President of Confimprese, claimed that “Retail lost 30% on the first Coronavirus weekend”. This percentage, following the extension of the so called “red zone” all over Italy, increased and reach “almost 100% of incomes: -96% in fashion and -80% in food/catering”.

With an essay released on the page of the Senate Committee on the Budget on the 24th of March, the Italian National Council of Shopping Centers (CNCC) communicated that “The Associates of the CNCC will continue to make all the sacrifices necessary to fulfill the requests of the institutions, which include the total closure of shopping centers, while guaranteeing the public service for distribution of food and basic necessities, although this will inevitably cause substantial losses for the sector, which represents 4% of Italian GDP, and for its workforce made up of approximately 587,000 employees. (...) Shopping centers have experienced a drastic drop in daily entrances throughout the country in these days, with peaks of -70/80% in the last few hours.” 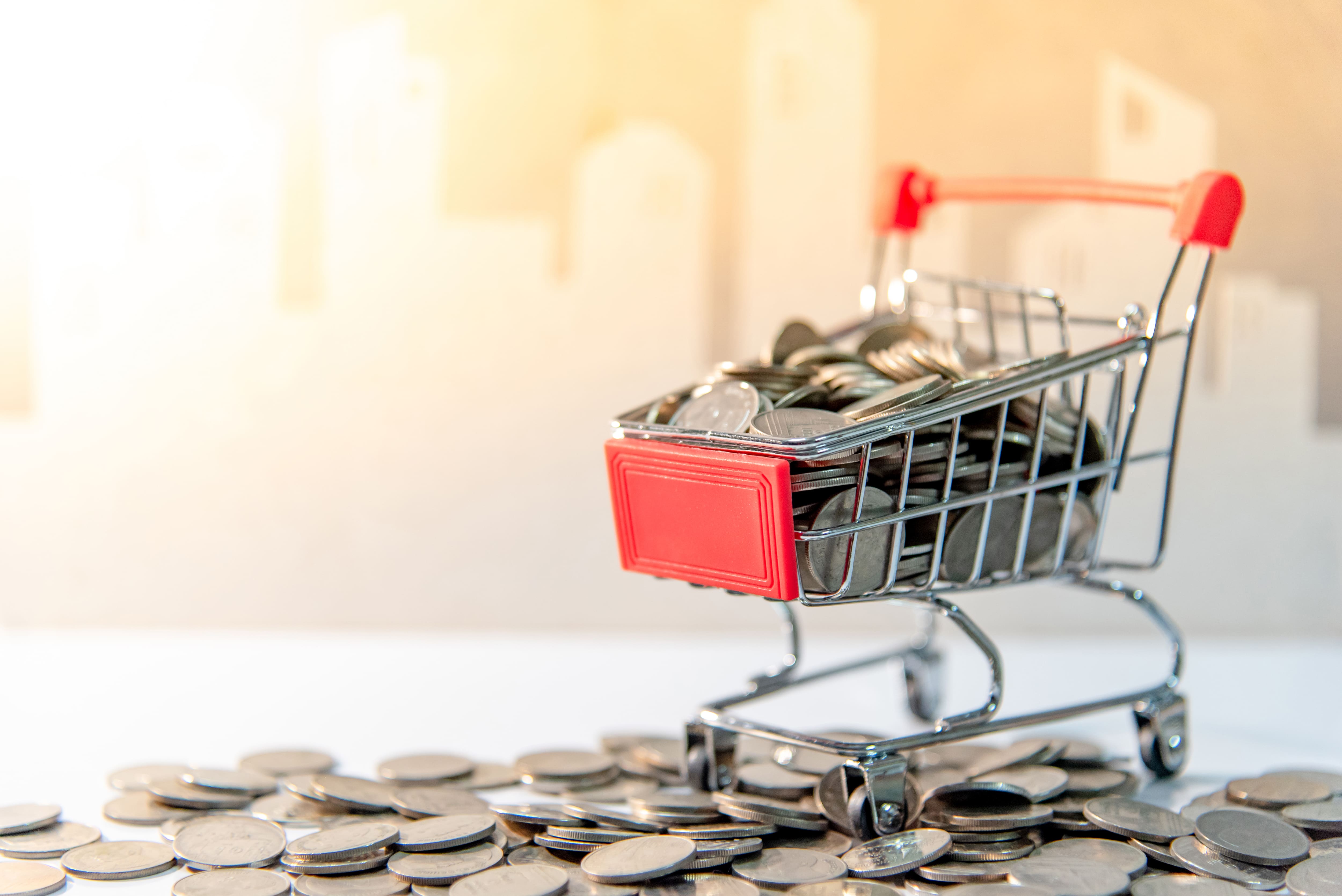 The in-store entrances drop in favor of online purchases which, however, cause some logistics and health problems. These are the reasons at the base of the recent decision taken by Amazon to focus on top priority products by temporarily stopping accepting orders on certain non-essential items in Italy and France. “Just like our customers use e-commerce as a useful instrument to their social distancing efforts, we too have adopted some specific distancing measures inside our distribution centers, in order for our employees to be able to work safely”, explains Amazon in a note.

Federico Corradini (CEO and Founder of XChannel, the first company in Italy specialized in cross-channel communication and marketing activities) gives us a detailed overview of the ongoing phenomenon in an article, where he writes: “Today, in Italy, we are experiencing a historic change concerning consumers. An example: in the second and third weeks of March the growth in the eCommerce value in comparison to the same period of 2019 was respectively +81% and +82% (Nielsen data). With a 30% increase in comparison to the previous week. Not much. Saying not much is not a provocation. An evidence of this is given by the graph of Google search volumes indexed for the query “spesa online” (online shopping in Italian): in this case the growth reaches peaks of +1,250%. The consumer shift towards new digital channels (from proprietary eCommerce to marketplaces, like Amazon and AliExpress) has just begun. On Amazon, indeed, the query “spesa online” has grown by 2,814% in the last 30 days, and this makes us understand we are dealing with a wide process, the power of which can be shown through a comparative analysis.” 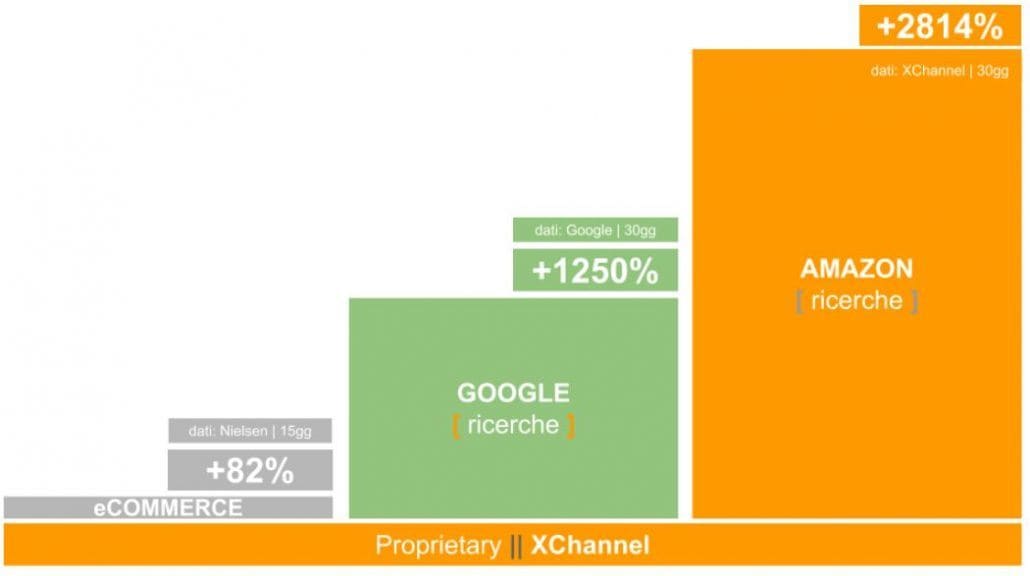 A new research by Havas Media (media division of the global Haves marketing and communication group) was conducted from the 13th to the 16th of March 2020, the first weekend when all Italy was declared “red zone” by the Government, on 800 people from 18 year old, representatives of Italian population.
Given that 42% of the sample declared that their new work modality has become “smart working”, there was a consequent increase in some activities that used to be disregarded, such as housework, time spent in family, and cooking, which gave different brands the chance to interact with their consumers in a different way, creating real Media Experiences at home.

Another interesting datum tells us that the propensity to purchase magazines and books online will increase for 33% of the interviewed people. The current situation, indeed, made fewer people go to the newsstands to buy newspapers and magazines. As a consequence, the main newspapers are trying to provide special offers that can attract new users. 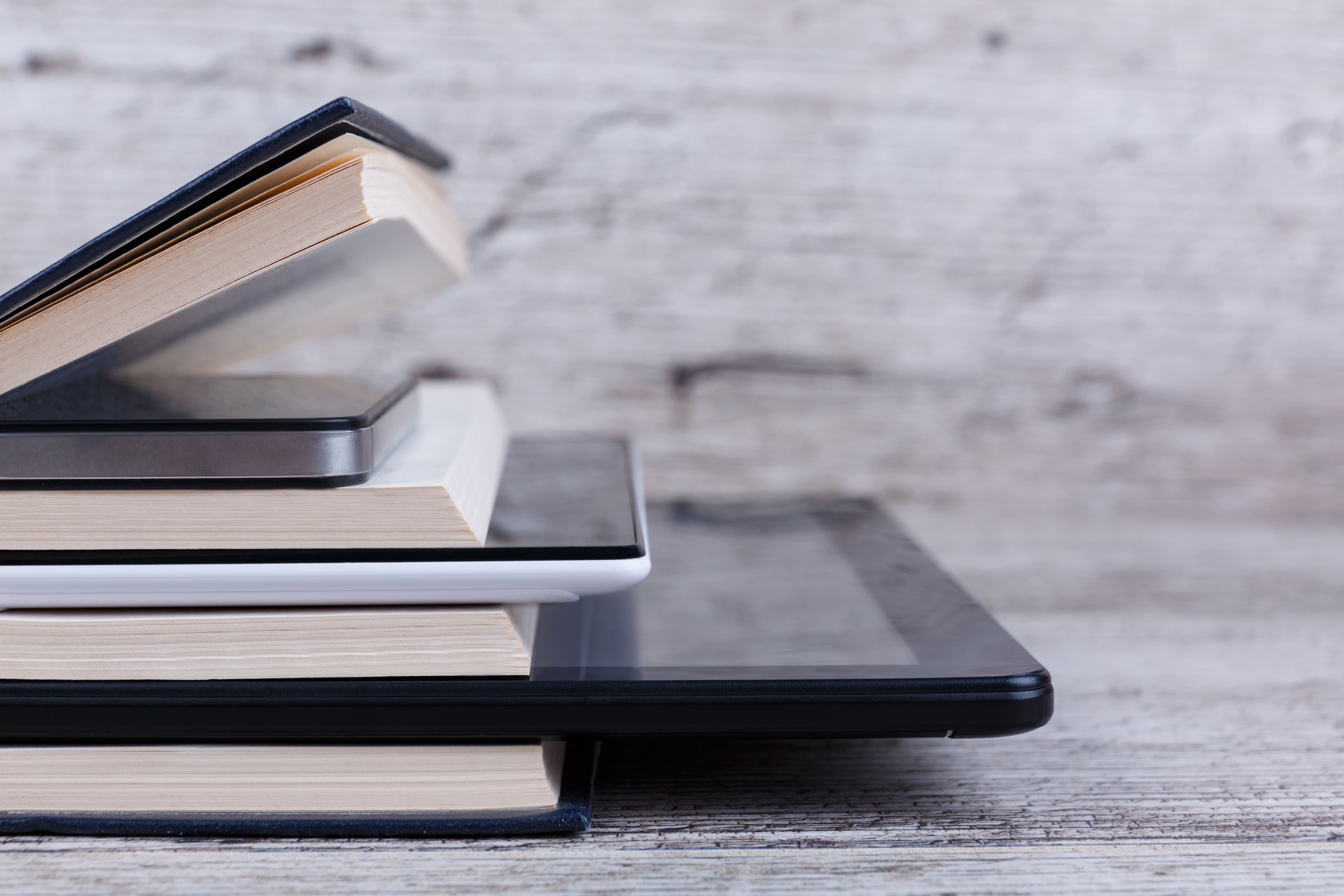 Although we are used to receive daily updates about economic and human losses, there are also some news that show us that the example of those who fights everyday to stop the pandemic inspires innovation and resilience.

In the last few weeks, indeed, given the serious lack of personal protective equipment, medical devices and health equipment, more and more companies have begun converting their plants to produce these products.
The number of fashion and luxury companies that made themselves available to contribute to limit the sanitary emergence is constantly increasing. “From Geox to Gucci, from Prada to Valentino and H&M. Among the most recent initiatives, on Wednesday the 18 of March the Prada Group - upon request of the region Tuscany - started the production of 80,000 gowns and 110,000 masks to be destined to the Region’s healthcare personnel. On the 23rd of March, Calzedonia, the textile group from Verona, reconverted some of their plants for the production of masks and gowns. This new arrangement will allow the production of 10,000 masks a day in the initial phase, with an increase foreseen in the coming weeks”. This is what Andrea Carli writes on Il Sole 24 Ore.

Also the Armani Group announced the immediate conversion of all its plants of Italian fashion for the production of single-use gowns for all the hospitals and health workers.

If someone had to re-think the structure of their production, someone else already had the perfect product without knowing it. From the snorkeling mask Easybreath by Decathlon Italia, a ventilator was created by Isinnova, a company based in Brescia. The sports clothing and accessories chain decided to donate 10,000 masks to the Italian regions to face the CoVid-19 emergency, “waiting for the tests and trials underway at the Politecnico di Milano and on the basis of the results of the Isinnova Company patent”.

Last but not least, an original and solidarity project comes from the wedding dress brand Pronovias: in order to give its own contribution against the Coronavirus crisis, it decided to donate the dressing gown to the women that fight the pandemic on the front line, when everything will be over. 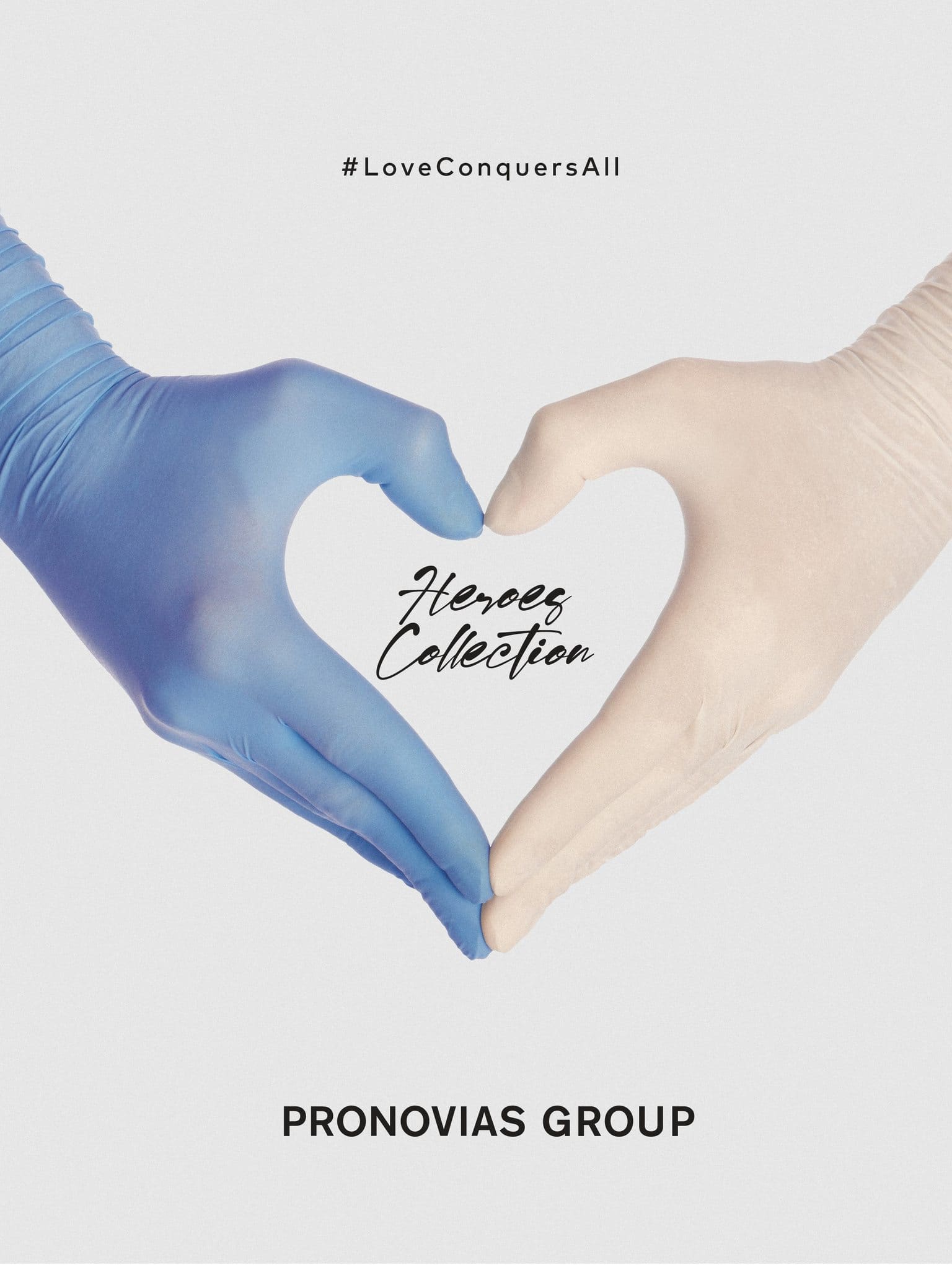 The Art Director of Pronovias Group, Alessandro Rinaudo, selected a series of gowns to create “The Heroes Collection”.
“It’s an honor to show my support and raise awareness for all of these women doing their best to overcome this pandemic. Love conquers all!”.

The Coronavirus pandemic will have many negative effects, but the positive effects shouldn’t be underestimated, including the strong acceleration in digital literacy and the radical change in habits: has the new era of eCommerce started?