You won’t believe your eyes (and you’re right) 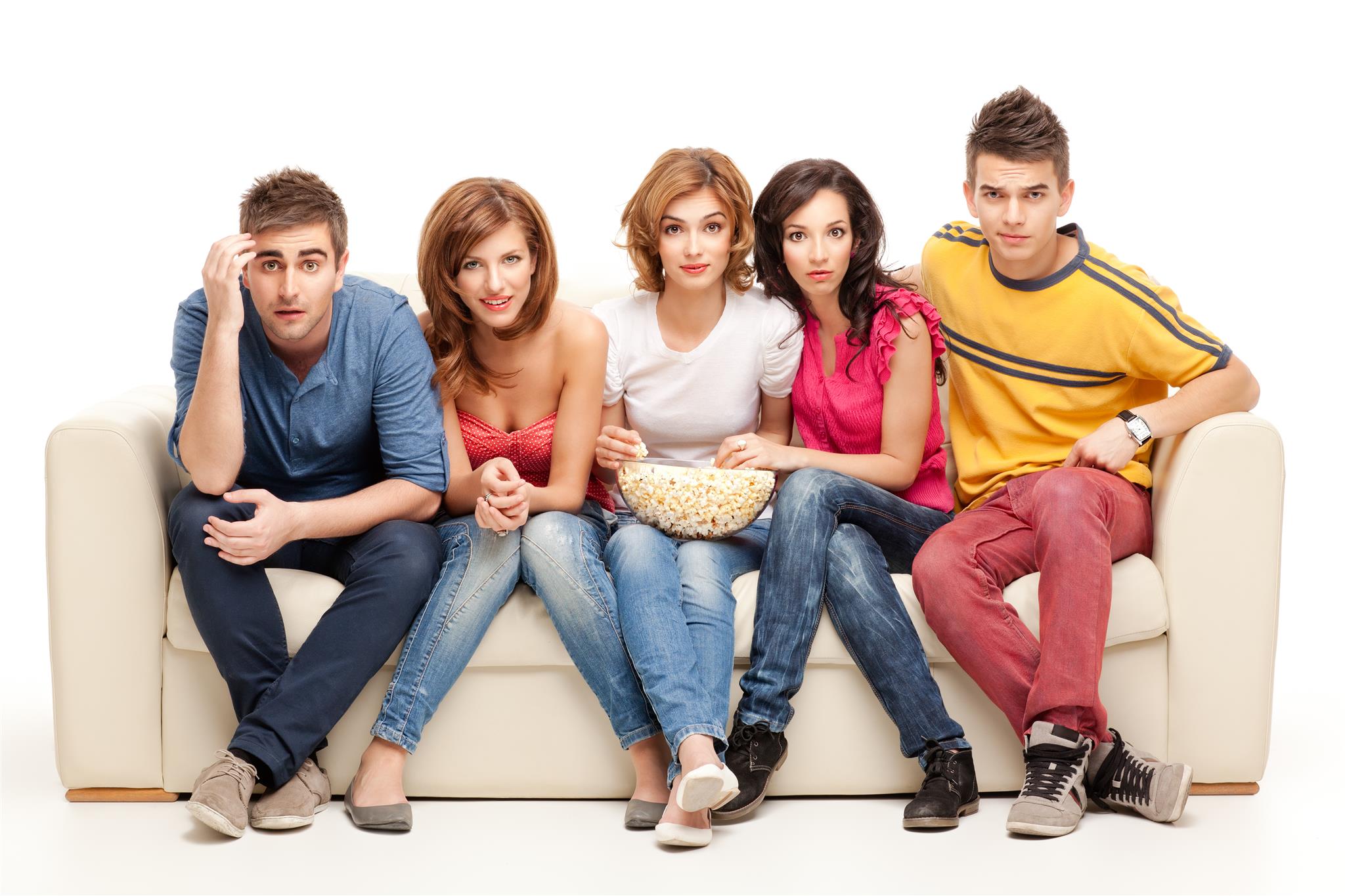 Augmented reality is changing the world of advertising, putting an end to the dichotomy physical/virtual. Different people watch the same thing at the same time, but they see different advertisements. Without visors or applications, without smartphone or special glasses. It’s already happening and it works on cutting-edge led TVs as well as on grandma’s Mivar, but probably nobody notices that. 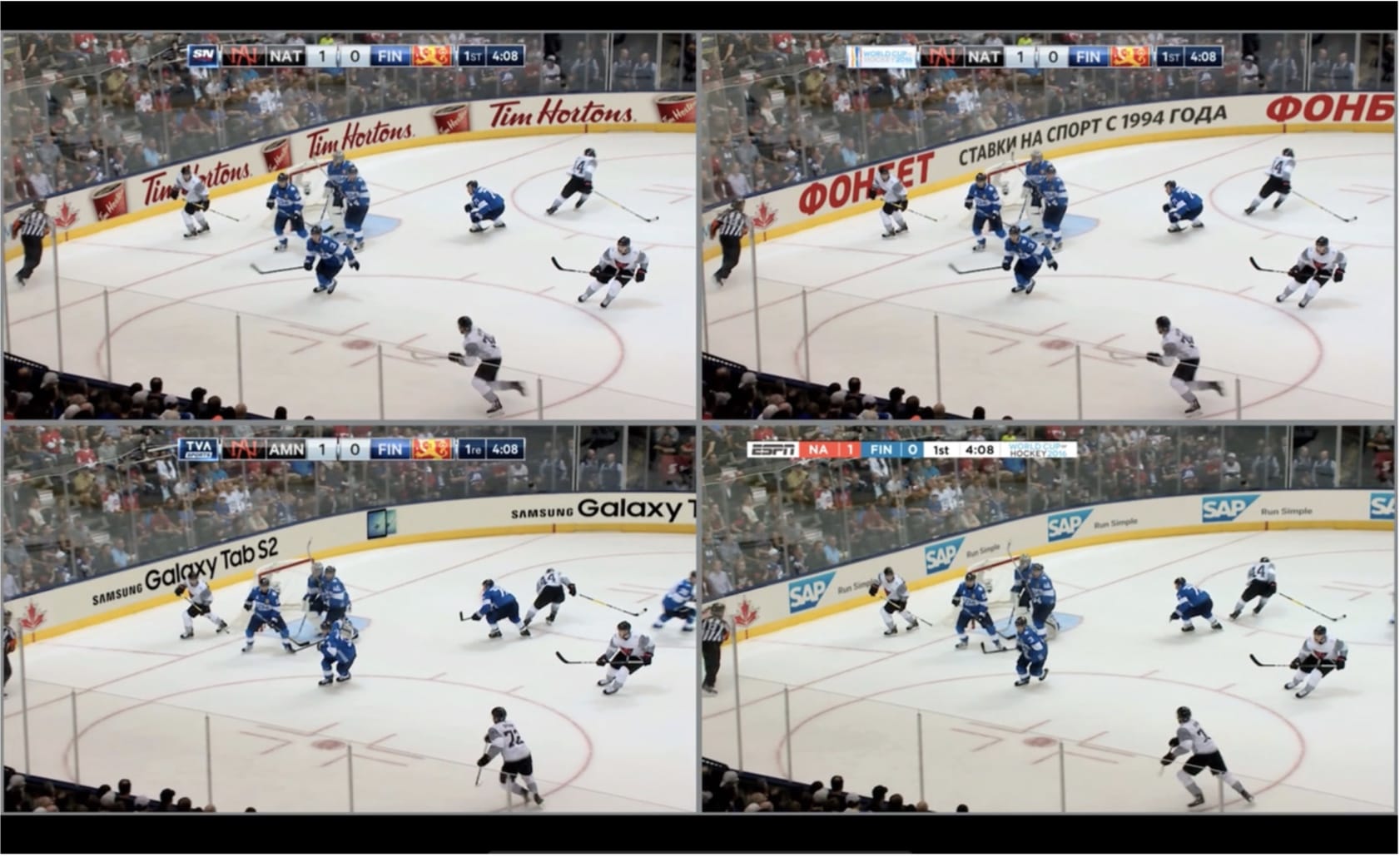 For years advertisers have discoursed about the internet. “It has changed everything. It targets too well. Let’s show a specific ad to each type of audience. In the beginning was the banner, then YouTube videos, now social media: to each cluster its own message. These leads do convert. This is the future. Newspapers are already dead, TV is going to die”.

But TV is not dead at all, on the contrary, it is fighting to become a main player again. What would happen if TV could compete with the web in terms of segmentation and targeting of audience from an advertising point of view? And what if we could combine very popular and premium TV content like football matches with the ability that the internet has to convey messages to different targets?

Contents change according to spectators

We are not referring to thematic channels or superimposed ads, this is something that belongs to the 90s and was used for compressors’ TV promotions. We are referring to the sport event itself, broadcasted on TV, and to the possibility of changing what is happening on the field, according to the spectator. Different people watching the same match, at the same time, but who see different things according to the target they belong to.

This is already happening and we don’t know. This is not a conspiracy theory, not even an attempt to explain Heisenberg's uncertainty principle.

We are barely speaking about the old, beloved on-field advertisement billboards. Do you know those “tablerone-shaped” billboards that enclose football (but also hockey, basket, American football…) fields all over the world?

The on-field advertisement billboard is probably one of the most powerful displays among the traditional means of communications. It’s physically on the field,  in front of everybody’s eyes. It is often part of the action. Hit by the ball, jumped over by players, kicked by goalkeepers, used by photographers as a tripod, by benchwarmers for the warm-up, by ballboys as hiding place: it’s part of the show.

It also has some flaws, our beloved billboard. It is static or, better to say, it was. With the  introduction of rotating sheets first, and of LED displays then, it has become a support at the disposal of more advertisers during the same match, with rotating advertisements.

Now ads move, of course, but the billboard is always there, anchored to the ground, silent witness of sport deeds, a 20th century tool in a digital world. What does it has to do with targeting and with the antagonism between TV and web? 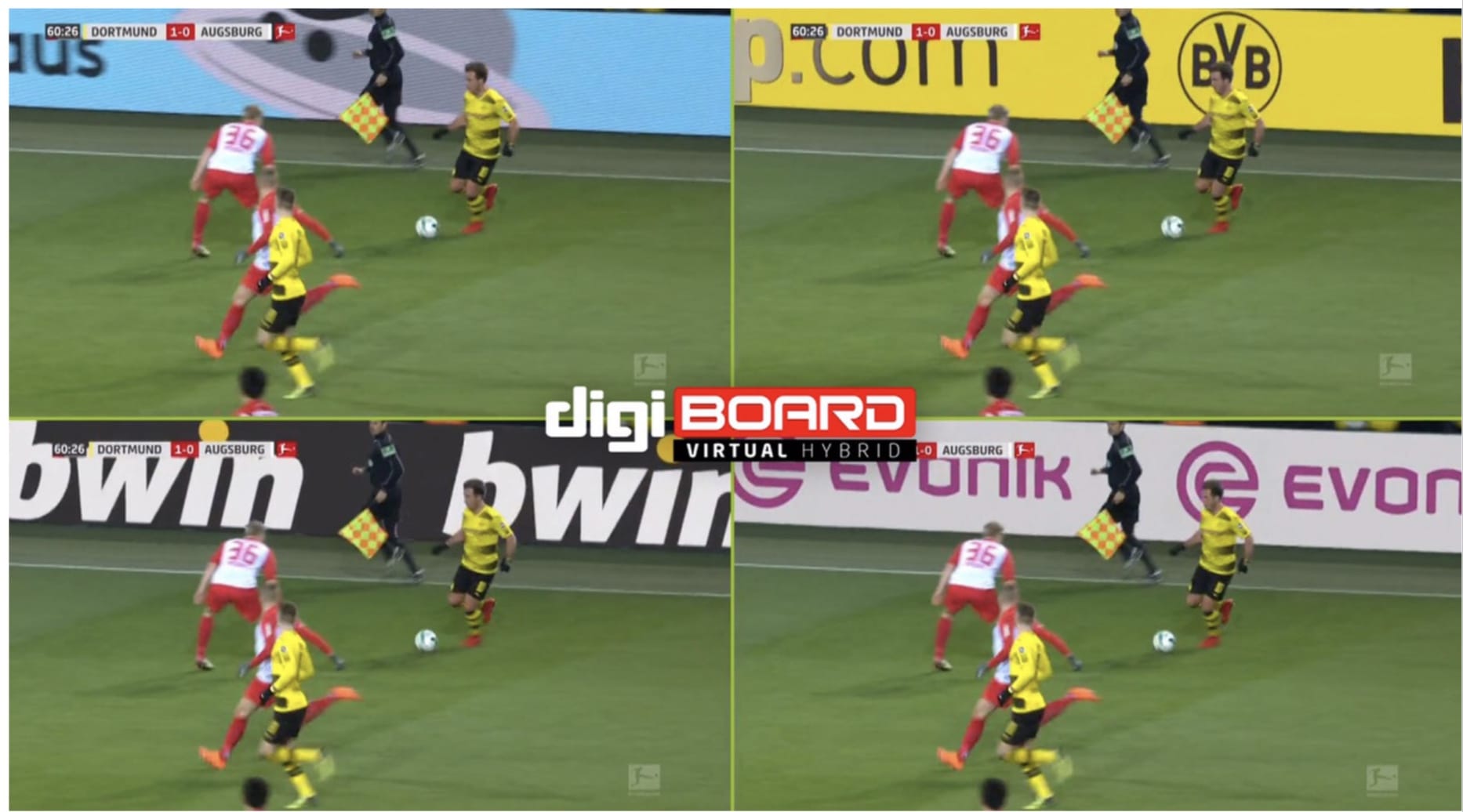 Everything is changing with Digitally Enhanced Dasherboards (DED), the augmented reality billboards, which can show different ads to different targets on different TV channels.

Let’s try to explain DED with a very easy example. The same match. The same stadium. The same dashboards, on the sideline. However, while those who watch TV from Europe see a Barclay Bank advertisement, Asian spectators are shown the Ethiad Airways logo. At the same time, those who are at the stadium see a message by Continental. Same event, same dashboard, three different advertisements for three different markets, at the same time.

Collapsed on our couches at home, we do not realize anything. We watch the match, and advertising messages flow behind players. There isn’t overlapping, there aren’t strange light effects or breaking images. The addition of digital in advertising is not evident.

An augmented reality technology, made of hardware elements and refined algorithms, interprets the images that come from the direction of the match and replace the concrete billboard on the field with images - creative ads - that are specific for the territory where it is broadcasted. What for spectators is only an advertising billboard behind players, in fact is a complicated overlapping of physical (the billboard on the field) and digital (creative ads) levels, which are automatically mixed, contouring everything in front of us, in real time. With nowadays’ calculation power, indeed, players, moving subjects and other obstructions do not affect the software, which keeps the virtual advertisement on the dashboard, without getting mixed up with the objects that interpose between the dashboard and the camera.

So far this system has been used by the Spanish Liga, by the Italian Serie A, and it has been approved also by the severe German Bundesliga - this piece of news dates back to the 13th of March - after a test carried out during the match Borussia Dortmund - FC Augsburg, broadcasted all over the world on the 26th of February.

Digitally Enhanced Dasherboards are changing the way we do - and give value to - advertisement in stadiums. Geographical targeting means maximizing advertising revenues. It is self-evident that selling spaces in a stadium during a match to as many different advertisers as the distribution markets of the product is a boost for revenues. 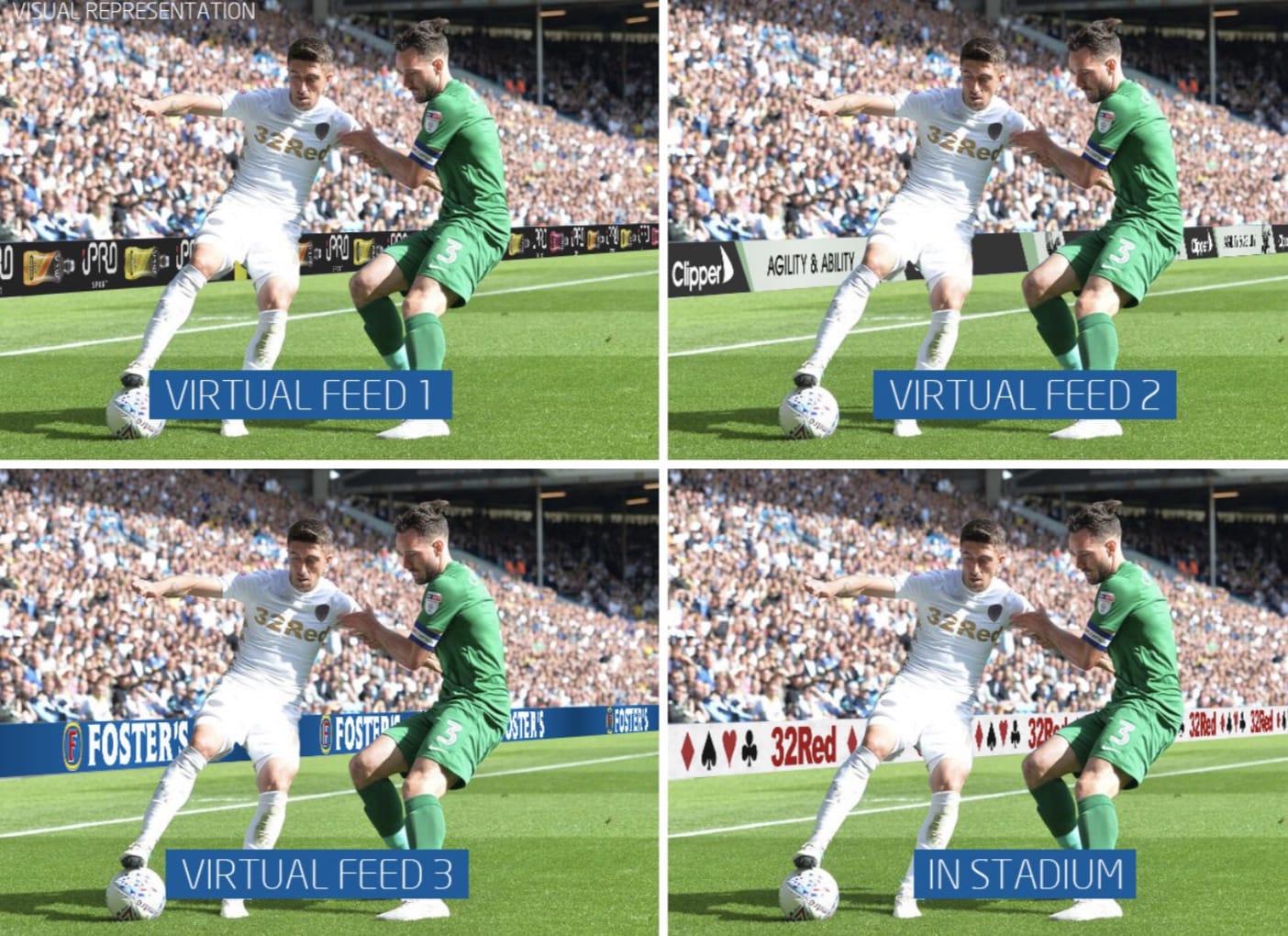 Coming in next: TV remarketing

Next step? Today hardwares and algorithms are powerful enough to replace images on billboards on the sideline. But in the future what will prevent us from replacing the sponsor logo on players’ shirts, promoting a different brand for each destination market?

And this does not happen only in football. The technological solution, indeed, ca be adopted in all locations: you only need to “explain” to the algorithm what object has to be overlapped with advertisement. No matter if it is a that a stadium or a racetrack, a concert or a documentary, any TV product can include tailor-made advertisements for different targets.

If we add to this the increasing potentials of TV broadcasting - broadcast over internet, smart TVs, live streaming - it’s easy to imagine an evolution that will refine the segmentation into more precise clusters, arriving to target each single person. After all, Netflix knows well who you are, it knows your gender, when you were born, what bank you pay with, your TV preferences, when you are more active and when you go to sleep, and who knows how many information can derive from these data.

Can you see it, too? This is TV remarketing advancing. We won’t be able to watch Master Chef without being proposed the commercial of a blender anymore. But this is already happening, after all.