The new social media Clubhouse: can it have a future in the sports business? 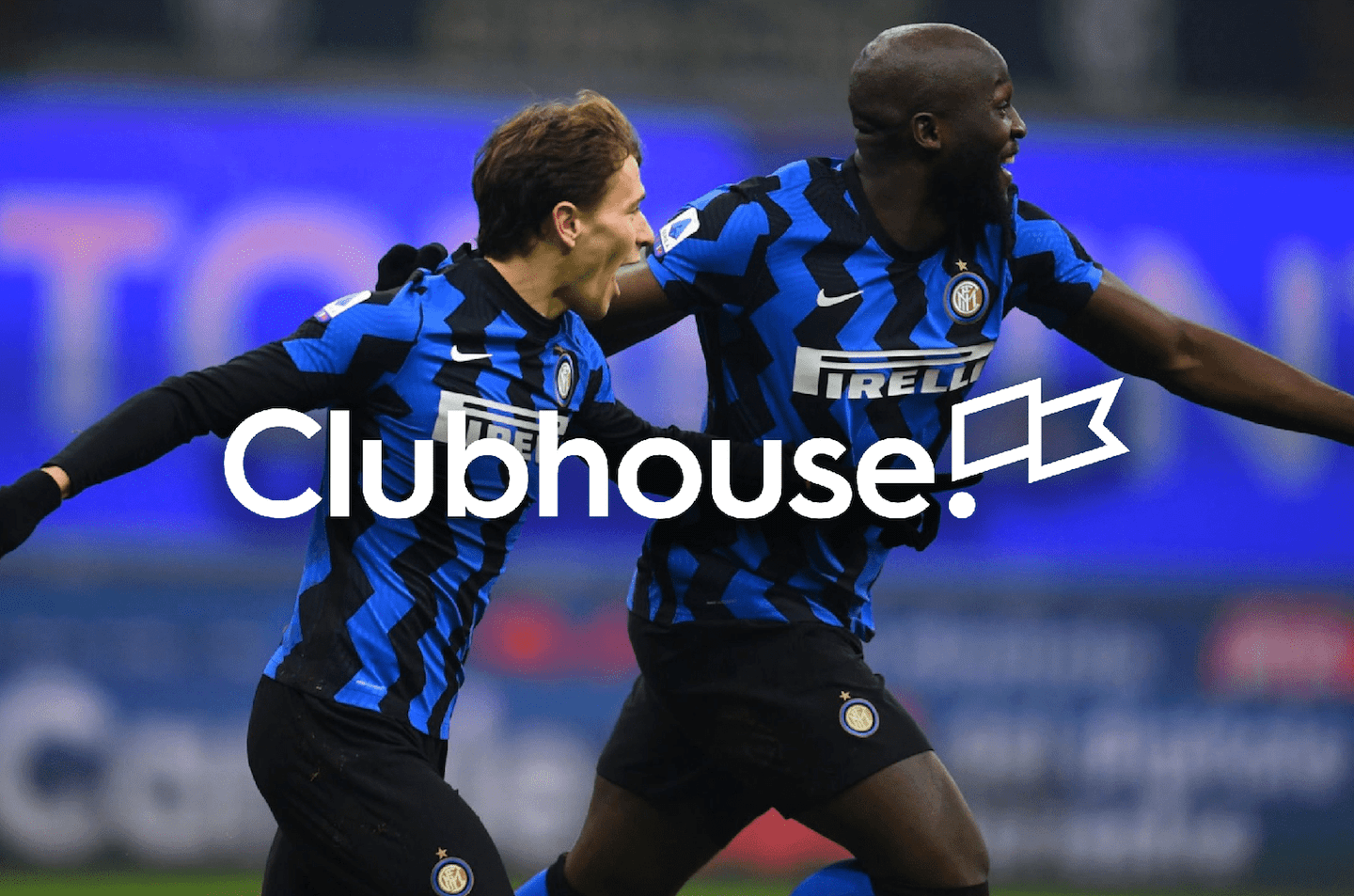 Clubhouse has officially been launched in Italy a few months ago and has enchanted tens of thousands of people. It brings a breath of fresh air and revolution that many of us were waiting for. We are, indeed, talking about the first vocal social media platform, so there’s a total absence of photo and video contents. There’s simply the users’ voice to lord. The main feature of Clubhouse is the “room” that anyone can create to talk about a specific topic. Alternatively, you can join a room of conversation of your choice, decide to interact with the other members or, if you have nothing interesting to say, you can just listen.

It’s possible to find a room about a multitude of subjects: from bitcoin to Buddhist faith, from movie club to mindfulness, from politics to marketing passing by a Chinese class. There’s a little something for everyone.

Sports too is on Clubhouse

Clubhouse is in the crosshairs of celebrities, influencer and found its way into the sports industry too. In the “Explore” tab there’s a full section dedicated to Sport where you can start follow fan clubs and meet up with supporters from all over the world. Among the most popular Premier League Banter FC (the house of Premier League’s fans), Manchester United FC Fans, The NFL Club, NBA Fan Club, Formula 1 Club. The set-up of these pages is curious, they have a weekly schedule of confronts. For example, English football’s supporters have the Weekend Recap Mondays, #AgendaWednesday, #OutsideTheBig6 Thursday and Lounges/Post Game Recaps. 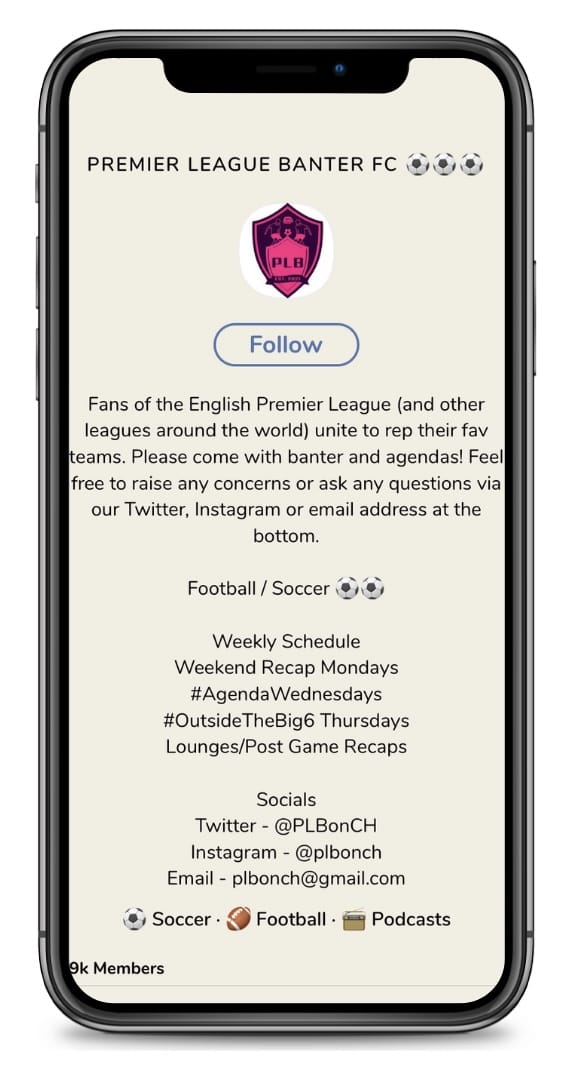 One of the first in football’s world to experience it have been the A.S Roma midfielder Nicolò Zaniolo, the Brazilian ex Juventus FC player Douglas Costa and the spearhead of S.S Lazio Ciro Immobile. The Lazio striker, awarded with the European Golden Shoe for the season 2019-2020, a few weeks ago sneaked in a virtual room and spoke jokingly with the people present entertaining them till late in the night. Until recently would have been impossible to dialogue with your idol sitting comfortably at home.

Clubhouse instead offers the special opportunity to surprisingly close the gap between athletes, fans and stakeholders. Everyone can surely remember a similar phenomenon that was trending especially during the first lockdown. We’re talking about Instagram’s live at all hours, announced by many athletes and celebrities. Among the most popular in Italy Christian Vieri’s “Bobo TV” that along with laughter and special guests glued to the screen many fans. Also, in a format like this was possible for users to interact with questions using the comment space. But, the difference that the social founded by Paul Davison and Rohan Seth brings is the option to interact with the caller more directly and intimately through your voice.

As the founders explain:

“Our goal was to build a social experience that felt more human, where instead of posting, you could gather with other people and talk.”

FC Internazionale is the first football club to land on Clubhouse

The Nerazzurri club is the first Italian football team to reach the new social network and it does in unsuspected times, a few days from “Derby della Madonnina”. 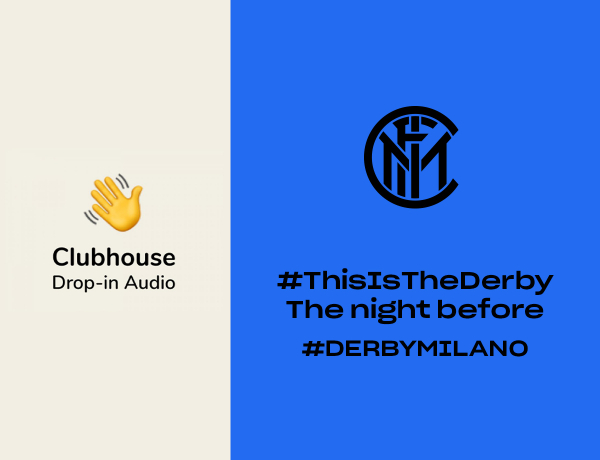 "We know full well that the buzz felt throughout the city in anticipation of this week’s #DerbyMilano is a special one. Everything takes on a different meaning in the days leading up to the derby: jokes, superstitions and voices. The latter, voices, are probably the most missed aspect of football nowadays. Because the spectacle of the Milan derby is also composed of voices: not just those of the stands at San Siro, amongst them chants, teasing and cheering, but also those of the chatter between friends before the match.

To try and at least partially make up for its absence, and to share the contrasting emotions that we all feel at the first whistle, we have decided to organise a Nerazzurri meeting on Clubhouse, the social network based exclusively on the voices of users.”

What is Derby Milano without its fans? Without their chants, teasing and chatting with friends before the match? The supporters’ voices are the missing element in the stadium along with the special atmosphere that embraces the city a few hours before the kick-off. That’s in a difficult moment in which is impossible to live this magic, Inter puts in field Clubhouse to shorten the distance.

The potential and the opportunity for brands

What lies ahead is the road to new exclusive contents, to close the gap to the fans and towards all-around entertainment. There are endless possible scenarios in addition to the ones related to the involvement of supporters with stories of the club or pre and post-competition comments. The possibility to give some space to sponsors and stakeholders is already in the air. Intriguing is the chance to dedicate virtual rooms to deepen and further explore topics inspired by sponsors. To have an idea, the leader brand in automotive could talk about, for example, the development of the electric or we could hear about the new trends in sportswear from a technical sponsor. It’s all about giving greater opportunity and value to the companies that support sports by relying on this new digital communication channel and by integrating innovatively the current strategies.

Surely, the empathy factor between who listens and who speaks is central. This could represent a great potential for brands that, if able to offer knowledge and interesting insights, could generate followers and new leads.

Clubhouse, as we saw, is a completely different social network comparing to the ones we are used to. When we identify a room where the users are speaking about topics of special interest, we just lie there and listen to and interact, perhaps. Then, times for using get longer and this reminds us of the time we spend listening to a podcast or to the radio rather than the moment spent scrolling the home on Instagram.

It’s clear to see that the world of social network is constantly updating and analyzing its evolution could often be complex and challenging. However, the opportunities and benefits given by a proper use can prove to be amazing and it could represent a turning point for those able to play in advance.